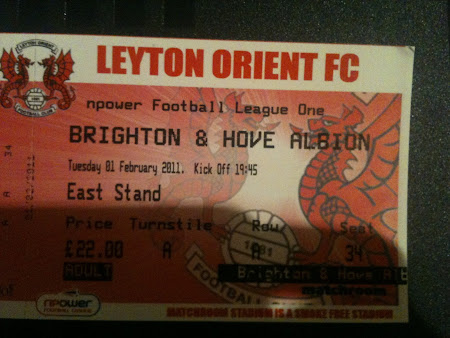 Hot on the heels of EFW’s jubilant excursion to Vicarage Road 3 days ago it was soon time to pack away (for the time being) the silver foil FA Cup trophy and get back to matters of a more serious nature. Serious nature, you say? Well, our match tickets clearly stated that this was an npower Football League 1 fixture between Leyton Orient and Brighton and Hove Albion, and that means one thing above all else : it’s time to concentrate on the league.

Heading into this game Total Football and Hove Albion were sitting atop the League 1 tree, 3 points ahead of closest rivals Bournemouth, and with two games in hand to boot. Three players that were rested at the weekend came straight back into the team including Elliott Bennett, the man who Norwich City have been dangling a Linton Travel Tavern complimentary bathrobe in front of for the past week. It came down to a face-off between Mr Bloom and Delia, and there was only going to be one winner in this game of transfer poker. They decided in the end that they didn’t want him, we decided that we did, and so he stays, let’s move on.

Orient themselves, although sitting 16th in the table and only two points from the relegation zone, have put together a decent run of form of late, especially at home where they recently tonked Sheffield Wednesday 4-nothing. They were also conquerors of Swansea City away from home in the Cup on Saturday.

Taking a quick look at the history of the games played between these two over the years brings with it both a statistical and a personal angle. Firstly, the stats: Brighton wins (37), Draws (25), Orient wins (33). That’s the stats done. Personally, through a mixture of luck, bizarre games, off-field calamities and a work friendship this history has been much more colourful. Ever since I embarked on what was probably my first away game with the Albion on 7th March 1995, where we won 3-0 (£1 at 12/1 thank you very much) and arrived home to snow falling on Brighton station, to say that the relationship with the Os has flourished would be an understatement. In fact it would also be wrong because I’ve hardly seen us beat them. Since that fateful night, I’ve been to Brisbane Road 11 further times making tonight’s game, yes you’ve guessed it, the 13th, which is why Brisbane Road won both the Most Visited Ground and Favourite Away Day awards at last month’s Goodwin Globes. As well as this stupidly high number of visits I’ve also sat or stood in all of the ground’s four (you never know these days) stands; South Terrace, West Seats, North Terrace, East Terrace, East Seats. I just need to get on one of those balconies belonging to the flats that overlook the ground and I will be Top Trump. But it’s not been a one-way relationship.

" I was at Peter Shilton’s 1000th game which was against the Seagulls at Brisbane Road, the game was also covered by Sky. We won the game 2-0 but it wasn’t without incident as I remember Shilts leaving his box and taking out a Brighton player…I think any other game it would’ve been a red card!" (Ah, the days of crowd-influencing pragmatic refereeing, eh ? – Ed.)

And what do you make of the proposed move to Falmer, young man ?

"I have been to the Withdean once with Nick, and Orient lost…….never again."

Wasn’t there a football game going on tonight ? Yes, but more of that in a little while. Before one can concentrate on the league one must focus one’s mind and body on the task at hand. So we went to the pub. Three of them. As previously mentioned on EFW we prefer all things #realale these days. As well as all things #seatedandwarm. First up, and I swear I’ve not made this up, was The Magpie at Liverpool Street (see what we’ve done there.) More a meeting up point than anything but nonetheless the meat pie and complimentary glass of wine (wine !) drink were a lovely starter for ten. A hop and a skip down the big shiny red train line brought us to Leyton itself, whereupon one of the first sights visible in the distance is the new Olympic stadium. A (very) quick few words about this. The ensuing struggle between another two London clubs as to which one is best placed to kill the British athletics legacy is not going without a keen eye being cast by those at the Orient. This is worthy of a story or two in it’s own right so go here and here for further on this.

A quick detour to the Birbeck Tavern, a traditional corner pub in a quiet residential area, brought us into contact with fellow fans for the first time tonight. And after a cheery smile from the two police officers who came into the pub, à la Last Orders, we supped up and started to walk to the ground. 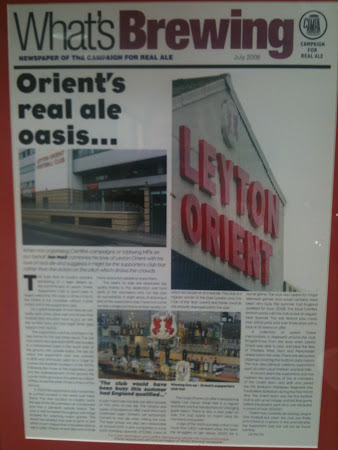 Brewing up with the O's.


Few players seem to elicit as much antagonism from Brighton fans than Scott McGleish. This stems from his part in one of the maddest games seen at the Goldstone, this 4-4 circus show. Since then, due to the combination of his stints with the Os and the two teams meeting quite regularly, the relationship is way beyond anything Relate can heal. *puts on tin helmet* I can’t help but feel though that for most of the Albion supporters at these games this is no more than your usual banter, albeit ratcheted up a degree or two. We call him a w*****, he scores, we call him a w***** a bit louder, he scores and turns his shirt around so he can point his name out to us, we call…you get the idea. He’s an Orient talisman though, they love him and we should just try to stop him scoring, although age and injury will see to that soon enough. Maybe we have already seen him play us for the last time.
Time was called so we made our way to Turnstile A (sorry guv, you can’t come into Turnstile B, it says A on your ticket) and joined the rest of the 2,000 Albion fans along the whole stretch of the West touchline stand.  Our throats recovered from Watford, the Albion faithful were in tremendous voice once again and continued our love-in with Mr Bennett.  Team Marketing successfully got the Albion players to wear a new, ‘one-off’ all-white kit, heaven knows why, presumably to make our Kiwi striker feel at home.  Once the game kicked off it soon became clear that both teams were suffering from some sort of post-FA Cup victories hangover and, dare I say it, it wasn’t long before people were turning to each other and saying that this game has got 0-0 written all over it. Orient clearly were prepared and did very well to snub out our triangles, the last ball all too often going astray. A chance for Matt Sparrow in the first half that was weakly punted to the keeper was about all that was worth shouting about, despite some excellent wing play from Bennett and hold-up work by Glenn Murray, Glenn Murray, Glenn Murray. 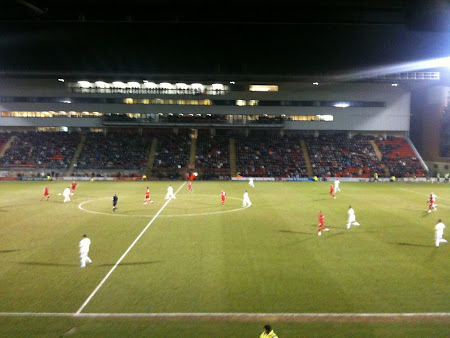 All-white at the back? The Albion appear in a (possibly) one off new kit. 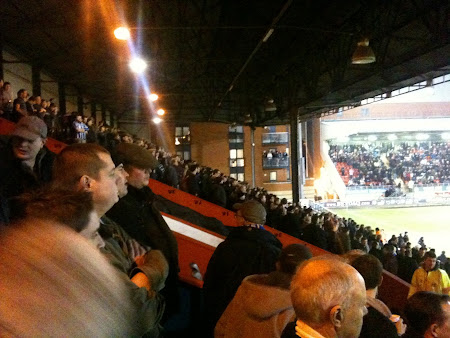 FAN-tastic. 2000 Seagulls flock to Brisbane Road.
The last ten minutes of the first half, and all of the second-half  saw us step up a gear but still not enough to create the number of chances needed to finally put one away.  Best chance of the game fell to Bennett after some lovely approach play and final ball played through by Calderon, but his good effort was parried away by the keeper, although the ref was the only one in the ground to miss this as he pointed for a goal kick.


And so things inevitably drew to a stalemate with a point secured but news coming in of victories by most of the teams below us slightly souring things.  Still, one point clear, with games in hand and another clean sheet.  It certainly wasn’t a bad night.  Orient will surely stay up if they can keep the battle and energy that they displayed tonight.
So, what about future prospects for our next match(es) together? Without counting our chickens too soon there is a reasonable chance that Brighton will be promoted to the Championship this season, and we will also be in our Amex spaceship by then. That in itself, for next season at least, would mean no league games, no Johnstone Paint Trophy home defeat, and just the small chance of being drawn together in the FA or League Cup (if Orient survive the rounds played before we enter that is.) I obviously want us to stay up forever so am not for one moment suggesting that getting relegated would be welcome, but I for one will miss the Orient away days bigtime.  But, football being football, I’m sure the four winds will conspire to make this so again in the not too distant future.
Up the Stripes, and Up the O's. 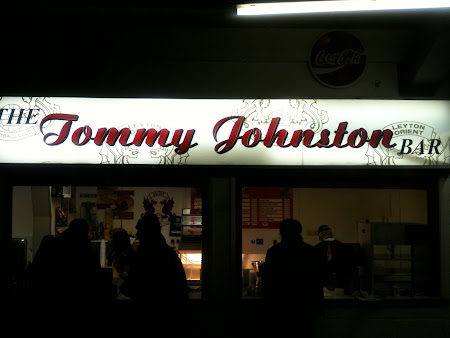 Pint please Tommy lad.
Follow Nick Goodwin and European Football Weekends on Twitter
Apologies for the quality of photos this evening. We had to use one of those emergency disposable cameras before legging it down to Boots to get them developed after the match.
- Feel free to comment below -
Posted by Danny Last at 12:20

I heard two unsubstantiated rumours about the Elliott Bennett deadline day saga; firstly, that Norwich City made that many bids, that when they finally came round to offering a serious amount of cash - in excess of £1m - they inexplicably realised they'd run out of fax paper. To make matters worse the Norwich branch of Staples had shut, and so they had to shelve their efforts.

Also, a last ditch attempt by Leeds United was thwarted, because by the time they'd worked out how to switch on the Elland Road fax machine, the transfer window had officially closed.

Their incompetence is the Albion's gain.

Thanks Danny for making me go against my better judgement and write this !  And to be offered a place on the EFW site, well...I hope people enjoy it.  Best

@Nick - My pleasure old chap. You can come again with a report like that. Right up the EFW boulevard.

Just glad I was able to work a fax machine - nod to The Canaries and The Peacocks - fend off a late bid from 'Arry Redknapp and sign you up before the deadline.

Getting a reference to the Linton Travel Tavern in connection with the budgies at Norwich is a mark of literary genius in my book.