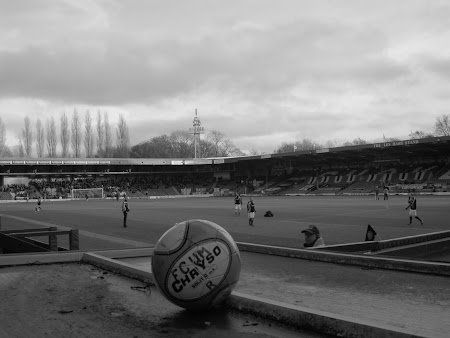 FC make some noise
FC United 0-1 FC Halifax (11:12:10)
There is no government health warning printed on match day tickets at FC United of Manchester. And there should be. I suffer from terracechantitis; a disease whereby if I hear a natty terrace ditty on a Saturday, it's liable to rattle around in my head for days, weeks and, I'm looking at you here Royal Antwerp, months later. Be forewarned: FCUM have become the kings of the natty terrace ditty.
EFW has covered most aspects of the rise and rise of FC United here, there and everywhere. The one thing missing is a report on a matchday experience on their (sort of) home turf. So I rolled back the years and journeyed north for a 540 mile round trip, something I used to do every other week following Brighton, before I became obsessed with, ahem, European Football Weekends. 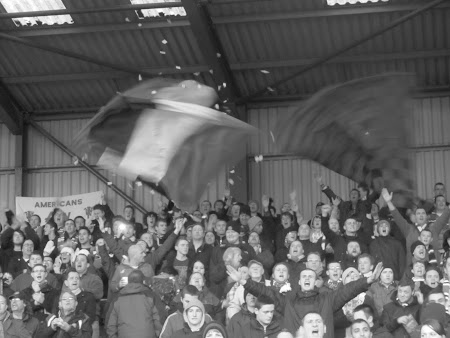 Under the boardwalk, watching FC. 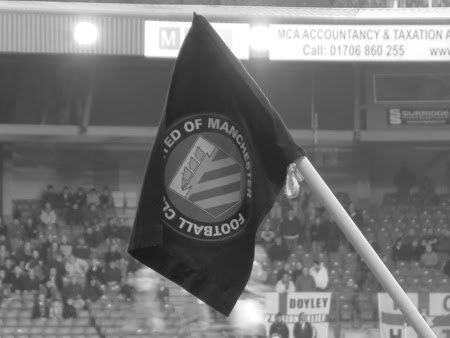 What's not to like?
First port of call upon arrival into Manchester was the Waldorf pub. It probably doesn't rank too highly on beerintheevening.com, but time wasn't on our side and it's only a goal kick away from Piccadilly station. I'm not too sure if any new bands have emerged on the Manchester scene in the last decade, because the pub was still pumping out tunes by The Stone Roses, Happy Mondays, Inspiral Carpets on loop. Still, that suits me fine and it proved an inspirational backdrop as Cynical Dave, City Dave, Mr Fuller, Christa and I made notes on the EFW divisional ready reckoner.
Despite the knock on effects of a devastating crash in this area last week, the tram service from Manchester to Bury was running as smooth as a pint of Boddingtons. It was hard not to rubberneck as we eased our way through the carnage left behind on Coronation Street. Our thoughts are of course with Ashley Peacock and his family at this distressing time.
Bury tram station pumps out Abba tunes on a Saturday morning. No, me neither, but Dancing Queen seemed fairly apt as Mr Fuller was still sporting a spot of mascara from his previous nights entertainment - part of a bet on a work night out in Denmark by all accounts. Those Danes eh? What are they like?
The hospitality afforded to the EFW team at the Stade le Gigg, Bury was of the highest possible order. A chap called Swampy took us under his wing and - after negotiating the crystal maze of the Bury main stand, with doors and stairways everywhere, like a deluxe edition of Cluedo - we finally ended up in the Course You Can Malcolm (CYCM) bar. Here we knocked back an ale brewed to commemorate FC United's FA Cup run and listened to some quality, and very funny, speeches by the home (team) manager and his trusty assistant. A bit different. A bit brilliant, actually. 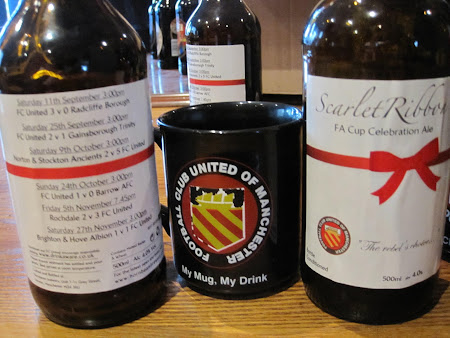 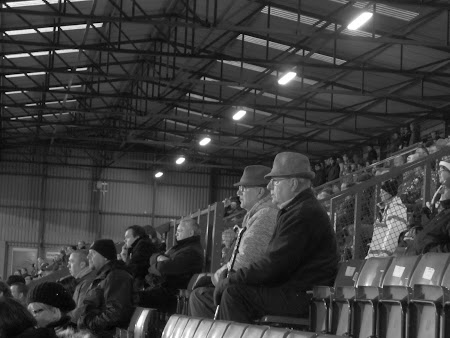 I say Ottershaw, this Barnstoneworth United can play a bit lad. 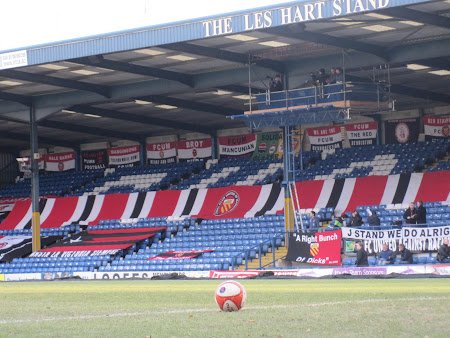 Heavy duty flagage.
The highest compliment I can bestow on this match, is that it felt like a game in Germany in terms of the atmosphere. And lets not forget to mention FC Halifax fans part in all this. They travelled in great numbers - 5-600 or more - and gave their team tremendous vocal encouragement as they celebrated their 100th game as the club who replaced Halifax Town A.F.C. a c0uple of seasons ago.
In truth, there wasn't too much high fiving between the two sets of fans. This was Yorkshire v Lancashire, and a battle of the roses, after all. A couple of FC Halifax fans had caused a bit of northern uproar by referring to FC United as ESPN United, and a few more chanted USA, USA during the game. See what they did there? Ouch. The home fans also insisted on singing anti-Leeds United songs. I don't get that, I don't get the songs about Eric Cantona either, but - for me anyway - 90% of everything they do makes sense.
We were plenty surprised by the high skill factor and flair from both teams during the match, which was befitting of such a large crowd. FC Halifax deserved their victory though. A small section of the travelling Shaymen put the stewards to the test by trying to encroach on the pitch at the end. This was swiftly dealt with, and within a couple of minutes both sets of players took applause. A great advert for the Evo-Stick League, in the seventh tier of English football? Yes Sir. The return fixture is on New Years Day back at The Shay. I can think of worse ways of starting the year. 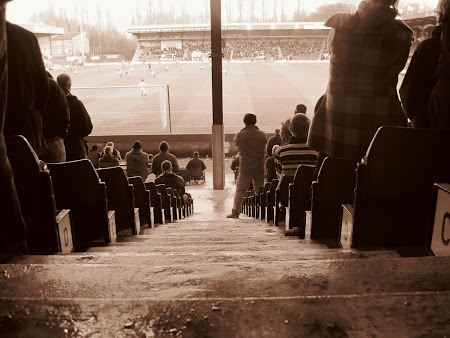 Time to wheel out the 'Stairway to heaven' caption again, tick. 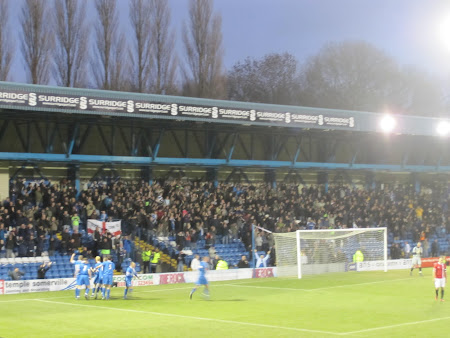 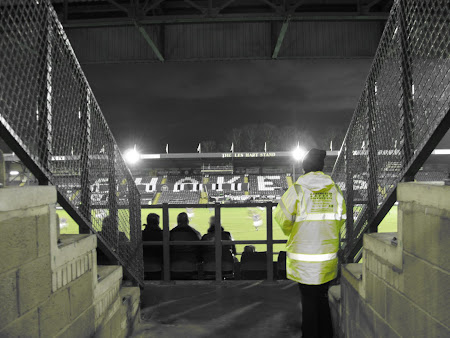 A mover and shaker.
For lots more photos from the day CLICK ME.
The Ball is Round version of events.
- Feel free to comment below -
Posted by Danny Last at 07:47

***I don't get the songs about Eric Cantona either.***

Well, they're Manchester United fans, aren't they? Might as well fail to understand MUFC fans singing about Cantona on the grounds that he no longer plays for them.

For a lot of FC United fans, following FC United is their way of following an idealised version of MUFC.

Danny old chap, Eric is a legend to both FCUM and MUFC fans alike, that's why both sets of fans still celebrate his being. Plus I guess, Looking for Eric included a number of references to FCUM too.

True comments about the fans' support. This was something that was evident at Withdean as you know and even Sussex Police wrote to FC to commend them on their behaviour (Category C??) and said that they were the best set of away fans they'd ever seen at Withdean. High praise indeed.

Would be nice to see FC pull free of the Blue Sq North relegation zone now - something I'm hoping our team does in Blue Square South rather quickly too.

@James - you appear to have promoted FC United a division, no?

Before you misinterpret this I'm not having a go or anything, but if the Glazer's left United tomorrow, what would happen to FC? Singing United songs and being known as "the fans who are banned from all other grounds" isn't helping their cause.

@Anonymous - If the Glazer family were to leave MUFC tomorrow then you have to look at who will replace them before asking what would become of FC. If MUFC were to become fan owned then you would find that FC would stay alive. Their community plans at Ten Acres Lane are too important to all concerned to simply walk back to Old Trafford. How the club would function is a debate for another day. If private owners were to relieve the Glazers of the debt heaped on MUFC then does the situation really change? The commercialism will still be rampant as will the fact that fans are still no more than customers in the eyes of the owners.

I'm not sure where them being "fans who are banned from all other grounds" comes from. I know of not one ground that has banned them - and the Cat C situation was an absolute joke.

Yes Danny I have. Or maybe I've just glimpsed the future?