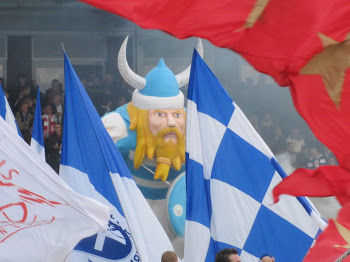 Take That and Party
SV Spakenburg 2-3 IJsselmeervogels (06:11:10)
The Spakenburg derby, derby of derbies, where have you been all my life? You can now lay claim to being the greatest match on earth, and the reason European Football Weekends were invented. Ticketmaster went into meltdown in the Netherlands last week, and not just because Take That were playing at the local EnormoDome. Everybody wanted to lay their mitts on a ticket for the 33rd village derby between the blues of SV Spakenburg, and the reds of IJsselmeervogels.
This was the first time the match had taken place in the newly formed Topklasse Division, the third tier of Dutch football. Previously, these two had been the most successful amateur clubs in the country. IJsselmeervogels Chairman Arian van de Vuurst had been a dissenting voice amongst those who wanted change, "professional football does not fit in with our culture" he harrumphed before the start of the season.
Traditionally, these two clubs have always tried to outdo each other on and off the pitch. When one team builds a new stand, the other will build one slightly bigger. Last season the reds let loose a pig on the pitch as a little dig at their rivals who they consider to be farmers. They themselves are proud to be known as the fishermen of the village. The blues responded by flying a light aircraft over the ground which dispensed inflatable toilet brushes onto the reds terrace. SV Spakenburg also unveiled their new mascot at the derby last year, a giant viking standing over 20 feet tall, brilliant. 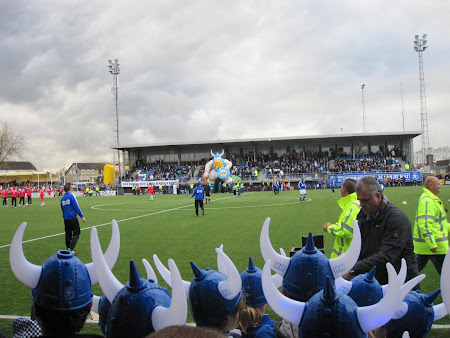 Getting the horn at football - tick. 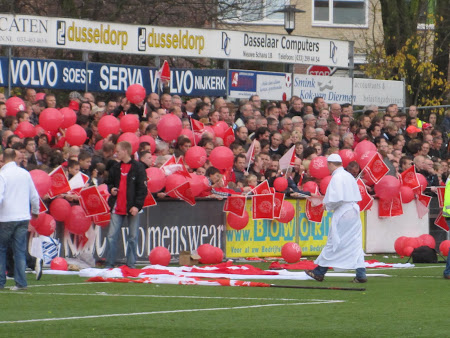 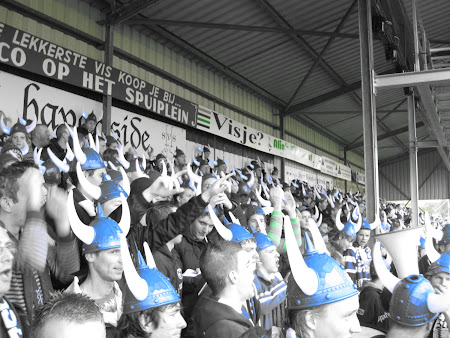 Come on you Blues... 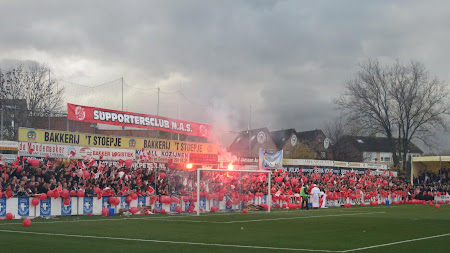 ....and Reds.
Due to some previous problems between the two sets of fans - home made bombs and a bit of violence - the mayor insists that no alcohol can be served anywhere in the village until 5pm on derby day. Between 1995-2002 they were placed in separate divisions to calm things down, and that appears to have done the trick. Since they started playing each other again, there has been no problems at all. A tremendous amount of banter has replaced the need to fight. Police turn away anyone looking to make trouble and the match now takes place in a carnival atmosphere.
Fans of beer needn't have worried. EFW has contacts in pretty much every port these days, and Spakenburg is no exception. We'd been invited to a pre-derby party by the blues. A party that consisted of a tremendous amount of beer and food in the garden of our good friend Wim Muijs just around the corner from the stadium. There was around 80 other fans in there for company including, bizarrely, a coach load of Ajax supporters.
We marched en mass to the ground before the kick off, passing the stadium of the reds on the way - it is in the same street after all. Aside from being invited to their party, we'd plumped for the blues initially, because SV Spakenburg was easier to pronounce. I didn't much fancy trying to slip IJsselmeervogels into a little terrace ditty. This match has been referred to in some quarters as the 'spell check derby' - nod to Kevin Day for that one.
It was heaving mass of humanity both outside and in the Sportpark de Westmaat. Every nook and cranny had already been taken. This match now attracts fans from all over the Netherlands, and today, the whole of the country appeared to be here. Brilliantly, SV Spakenburg had produced thousands of blue and white viking helmets with flashing horns for the occasion. For their part, IJsselmeervogels had dished out red flags and humongous red balloons to their fans.
The terrace holding the vocal element of the home fans had been decorated with flashing blue disco lights. Flame fire cannons went off at regular intervals during the match as well as blue streamers. Of course, the giant viking was back. He's the size of a two buses, and then there was the Pope. Ah, the Pope....
The blues manager is called Andre Pope. Two weeks before the derby he was allegedly done for driving under the influence of a few beers. This was all the excuse the reds needed. To mock him, they had a man dressed as the pope who appeared to have a special licence to invade the playing surface as he wished. He was Vogels 12th man and spent as much time on the pitch - which is artificial by the way - as the players.
You'll notice I slipped the word 'Vogels' into that last paragraph. Vogels will do apparently, and we needn't mention the IJsselmeer bit. As such - and in the interests of fairness - we crossed the divide and spent half of the match with the blues and the other half in with the reds.
As the two teams emerged general carnage ensued, but in a nice way. Huge plumes of blue smoke rolled across the ground, those fire cannons went off, flags, balloons, the arms of the Pope, ticker-tape and anything anyone could get hold of was thrust into the air. What a welcome. And then it went silent as fans bit their nails and had their nerve ends shredded by the on the pitch antics. 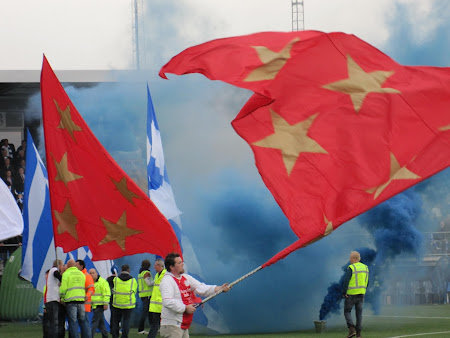 The two teams emerge, somewhere in there... 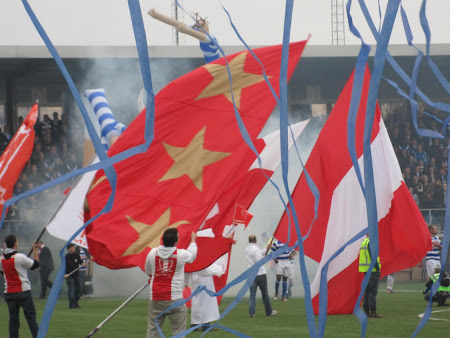 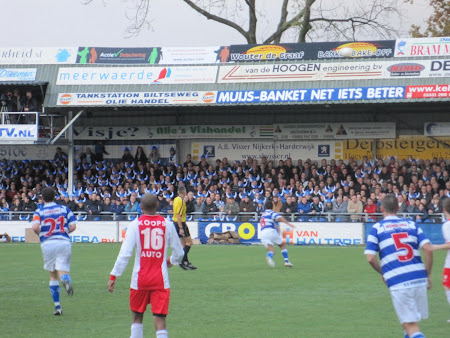 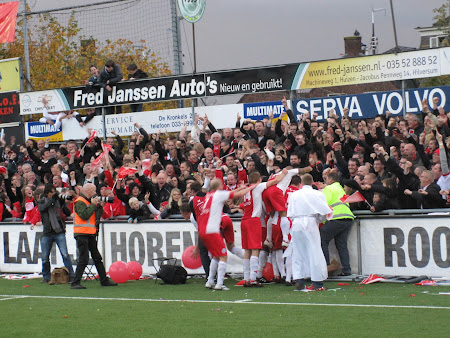 ...until IJsselmeervogels start to turn the screw.
It was so busy in the stadium that it was a job to see the whole pitch. At one point, I went into the sports hall behind one of the stands to see if they were serving beer yet - they weren't - and found around 1000 fans in their watching the match on giant screens. There were people everywhere. Officially, the crowd was given as being 8500. Blink blink.
Despite SV Spakenburg topping the league and having played the better football all season, they froze on the big occasion. Vogels ran out 3-2 winners and thoroughly deserved the win. Their supporters poured onto the pitch at the end and celebrated in the centre circle why the home fans shed tears of remorse into their viking helmets. SV Spakenburg will be back though. This Wednesday they travel to PSV Eindhoven in the Dutch FA Cup and will have the backing of 1500 fans who are travelling up in a convoy of over 25 coaches. 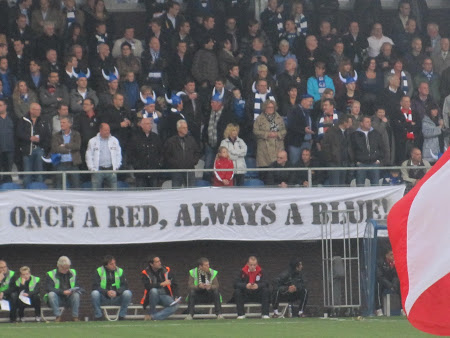 I'll take your word for it. 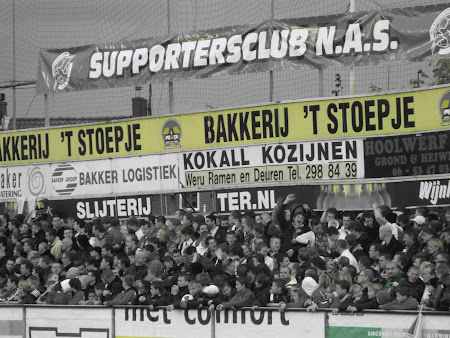 I've got a colour accent feature on my camera, and I'm jolly well going to use it.
Now, it was time for the fun bit. They love to party in this village, any excuse. There was a party on the Thursday before the match when the women's teams played against each other - SV Spakenburg won that game 7 (seven) nil - and now it was time for us to join the fun and games. Behind each of the two stadiums is a sports hall, both were staging parties, and by now the beer was flowing - gallons of it.
We kicked off with the blues. The DJ was trying to get things going, but with their teams defeat the fans weren't really in the mood. It was still brilliant in there, but we had to move on. Two hours later - and without anyone looking - we sneaked out, walked across the pitch of the reds stadium and into their party. My word. The IJsselmeervogels team were on the stage, fans were standing on tables and chairs singing. It was as if they'd won the world cup.
The night ended with the inevitable swinging of a shoe on the dance-floor. We danced to a traditional mix of euro techno pop, football party tapes and, ahem, Coldplay. The Pope was there of course. We danced with him to. It sounds silly now, but the most popular dance of the night was some sort of Hokey Cokey number. I say silly, but when you've had a skin full of beer and you're on your holidays, it's is tremendous fun.
If you've ever wondered what happened to the dry ice machines that were made redundant after Top of the Pops stopped filming, don't. They've all been brought up by the folk of Spakenburg. Dry ice filled both sports halls all night. This was, and is, the party of the year and everyone was out and dressed to impress. I haven't been to a party for around five years and now I was on my third of the day.
That was the Spakenburg derby. I've tried to convey at least some of the magic, and I hope some of it has come across. Of course the fans themselves take it very seriously indeed, but that never once threatened to spill over into violence. Many of them partied together afterwards. This is why I think this is the derby of derbies, and one of the best matches going. The return fixture is on April 16, European Football Weekends will be there, will you? 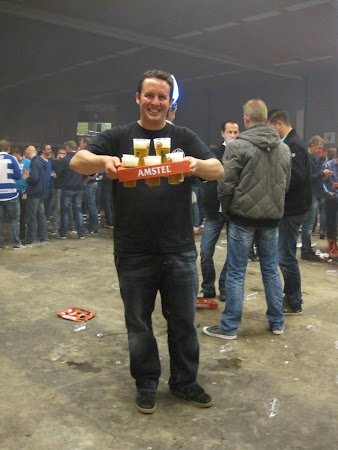 It's 5pm and the beer ban is lifted. I'll have 8 to celebrate please bartender. 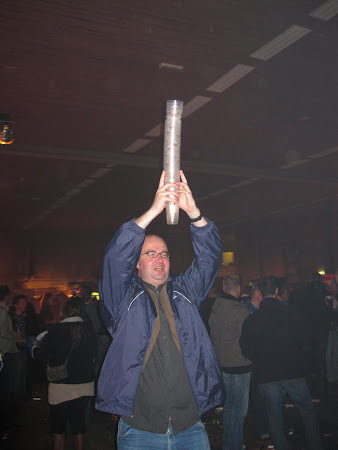 And Stoffers will have a further twenty. 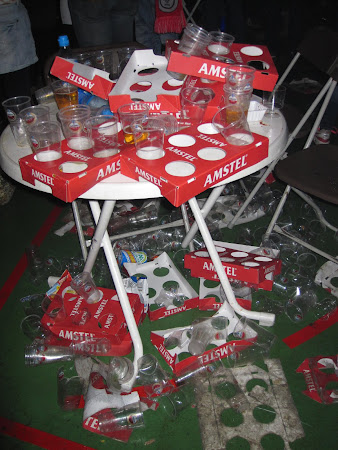 Meanwhile, over at the reds party, this is what every table looked like. 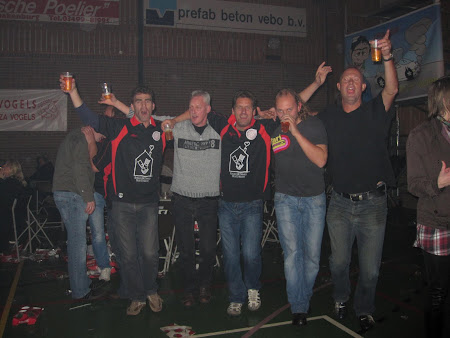 Bragging rights in the bag, until April.
For lots more photos of the day CLICK ME.
Follow European Football Weekends on Twitter.
The following day we went to see FC Utrecht v PSV: READ ALL ABOUT IT.
- Feel free to comment below -
Posted by Danny Last at 08:17

Email ThisBlogThis!Share to TwitterShare to FacebookShare to Pinterest
Labels: Derby of derbies, Football in the Netherlands, IJsselmeervogels, SV Spakenburg, The Spakenburg Derby

There some more photos from the fantastic FootballFans.Eu website here:

And also a video of the highlights here from the SVStv website:

I will be there. I don't wanna miss these European Football Weekends anymore!