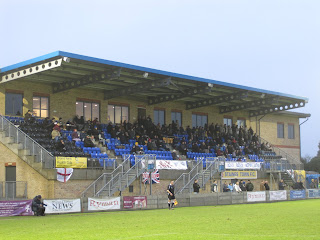 - click on photos to enlarge image -
Make no mistake about it, last week could have been the end for Lewes FC. We came perilously close to going out of business. Thankfully, the club has a number of heroes willing to invest time, effort and money into securing our future.

One of those heroes is Rooks gaffer Steve Ibbitson. He's far too modest and proud to take any of the credit - so we'll do it for him. He worked tirelessly to ensure the 48k that was owed to the HMRC was paid. He works for free (free!) - as do others - and in my opinion he deserves the freedom of Lewes, or at the very least, a couple of pints of Harveys and some pork scratchings.

So with the club saved (hooray!), the only thing threatening to scupper another EFW awayday was the weather. Apparently, it has snowed a bit lately, not sure if you caught it on the news!? A 24 hour visual was kept on the Staines Town message board and eventually, we received a phone call - from the delightful Angie - confirming that Staines can do what Portsmouth can't and get a game of football on in adverse conditions. Full marks to The Swans.

With "no attractions so to speak of" in Staines; Cynical Dave, Big Deaks and I made a beeline for the pub before the match. I'm normally pretty good at darts but I had my work cut out during out pre-match work out as Lee 'The Bear' Deacon and Dave 'The Grinder' Mckay saw me off like a puppy during a two-hour arrows fest. It would be remiss of me at this juncture not to mention that The Bear recorded an 8-dart finish (nb 301 not 501). 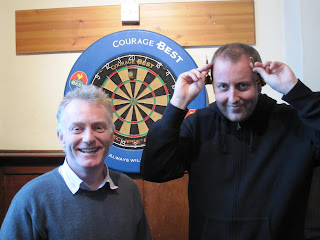 The Grinder and The Bear 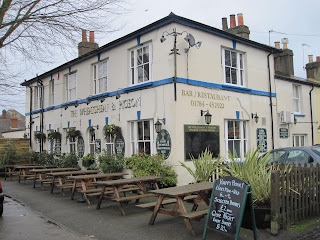 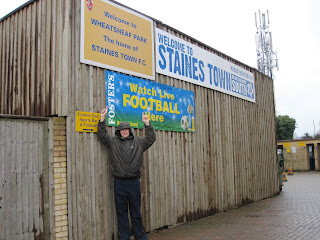 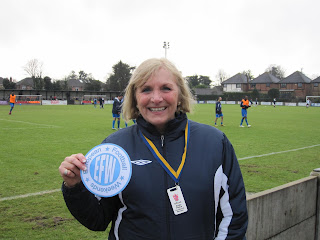 The delightful Angie
So with my tail tucked firmly between my legs, we nipped across the road and into the Staines Town FC clubhouse. The walls inside boast a rather splendid display of sporting memorabilia, not just confined to football. I noted that golfer Justin Rose had chipped in (chipped in!) with a signed PGA shirt. 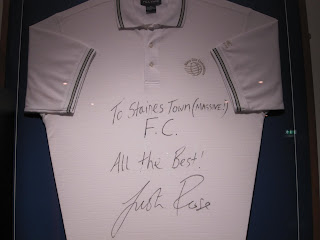 Justin Rose chips in with a signed shirt
Over a few pints we discussed football matches that have been called off in dodgy circumstances. It's my belief that some clubs don't always do their best to get games on, using the excuse of the weather, when they've a few players injured or whatever. It was revealed to me that certain stuff does indeed go on. You can find out on the EFW PPV service some of the shocking lengths that clubs to behind the scenes to get a game postponed.

As the volunteers at Staines busied themselves by selling us tickets for this and that, I noted that one of prizes for their 'Valentines Ball' was for 5 tickets to see Chelsea play at Stamford Bridge. Cynical Dave summed up all our thoughts on this one when he trumpeted "I'd rather win a 5000 piece jigsaw puzzle of a Swiss Cottage".

As the game got underway, the Staines Massive choir (huddled together in the top right hand corner of the main stand) began to loosen their vocal chords. They mocked Lewes striker Jean-Michel Sigere - Siggy to his mates - for his resemblance to Cyrille Regis. He returned the compliment by getting his noggin to a Dan Royce free kick and powering home a marvellous header for the opening goal of the match - nice one Cyrille.

In the over exuberant goal celebrations that followed the goal, Dave fell onto the pitch and muddied his thumb. 0-1 to Lewes at half time, our first away victory almost in the bag, it was time for another beer. What could possibly go wrong? 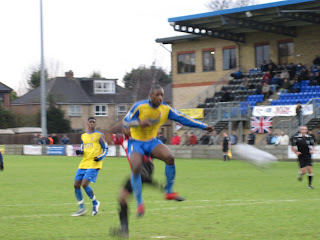 Siggy (sort of pictured) heads Lewes into the lead. Photographer of the Year award not in post. 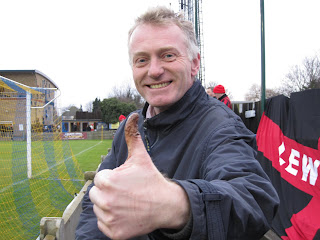 A muddy thumbs up from Cynical Dave
Two scrappy goals for The Swans - inside two minutes - the other side of half time is what can and did go wrong. Another defeat to add to the long list then but one in which Lewes could and should have got something from the game. It's tedious to berate referees but I'll do it anyway. This one made a number of puzzling decisions. After an earful of abuse from Cynical he turned around in the last minute and told him to "f**k off!". Effing, jeffing and reffing amongst his myriad of talents. 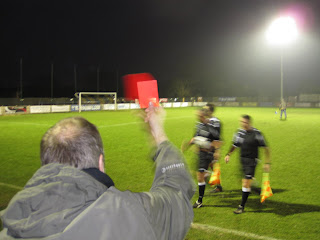 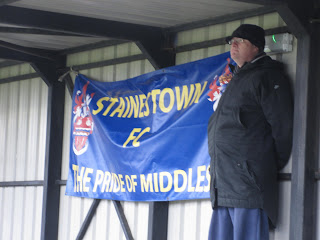 The Pride of Middlesex. Although it's actually in Surrey according to Dave. 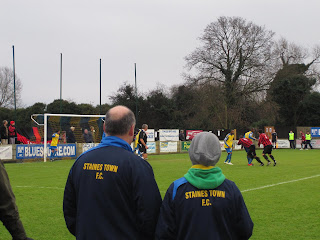 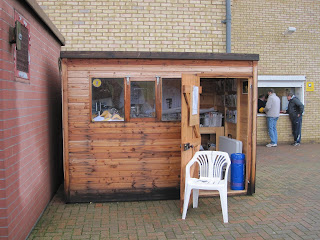 .....in the Staines Town megastore of course. XL for me please. 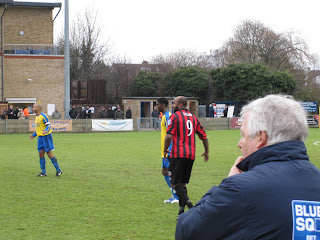 Ibbo gets things into perspective 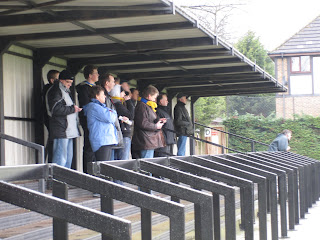 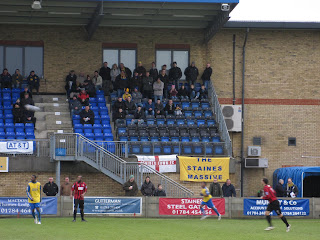 The Staines Massive
After a post match beer back in the clubhouse and a few discussions with the - very friendly - home support, we tried to make our way back to the station. I say try because the EFW team were cruelly distracted by a Beehive (pub) en route. Worst still, the dart board was free and they served us delicious beer in pint glasses.

In between the ale, the darts and the football, I did put my journalistic hat on briefly to interview someone at Staines Town to get the lowdown on their club. So step forwards Stuart Moore who revealed the following in a world exclusive Q&A with EFW:

What is the best thing about supporting Staines? The best thing is probably that we're renowned as a very friendly, open and honest Club. We've had the same Chairman for over 25 years now and there's not a Club around that could honestly say they don't like us. We're friendly hosts and amicable visitors on the road and there's always a peaceful and quietly confident and proud air about the place and the people who are involved.

And the worst? Well, there's no major negatives. Up until our first FA Cup run of two years ago we had a reputation for being really quiet some visiting supporters renamed our ground the 'Library', but with some solid support growth, we're just starting to come out of our shells now! So maybe the thing that frustrated me most over the years was the level and lack of noise at home on match days.....but as said, both are growing now and that's pleasing.

What has made you laugh in your time following The Swans? Looking back at the facilities we demolished (only approx eight years ago now) makes me laugh - it's amazing to think we played football at such a senior level in such ramshackle facilities then! Of course, we're mightily proud of our Wheatsheaf Park stadium now...it's the envy of many who visit us. When I think back to the days of the 'old green hut' and how we used to run operations from that...now that's laughable.

Which nickname do you prefer: "The Swans", "The Wheatsheafers" or "The Massive"? The Swans is our formal nickname for the Club and the 'Massive' has been adopted by the supporters. This reference to 'Wheatsheafers'.....where on Earth does that come from? Nobody had ever heard it before until a SKY commentator used it in the build up to the televised Stockport County game two years ago. We think it's one of those classic Wikipedia urban myths? It was never mentioned again.....until you just brought it up!

We like a beer before and after our football so what's the clubhouse like at Staines? The Clubhouse at STFC is a little sterile, I'm afraid. It's very smart and cool, but not traditional. The bar is not ours you see, we only have use of it as it is a part of the associated Thames Club facility. We'd like to take it back under our control (discussions have been had) and then we'd endeavour to make it a little more 'football friendly'.

Anything you sum up Staines Town in a couple of award winning paragraphs? Staines Town FC is a proud, yet humble club. Formed in 1892, we've enjoyed a very stable history with not so many peaks and troughs. Consistency has been the key. Reflecting the Town of Staines itself, which was described in Victorian times as "gentile market town by the Thames"....perhaps things haven't really changed much? Millwall proudly sing - "No-one likes us", we tend to think the opposite in that we've rarely done anything to anybody that would make them view us in a negative way.

In the last six seasons, following the return to a rejuvenated Wheatsheaf Park stadium and the installation of Steve Cordery as Manager with his assistant Craig Maskell, long-serving Chairman Alan Boon has carefully guided the Club to unprecedented success on and off the pitch. As a Club, we're totally financially solvent - How many Clubs can place their hand on their heart and say that with confidence? Run by a committed band of two dozen or so long-serving and proud people and supported by a now consistent band of 350 or so regulars, the Club has quietly yet efficiently raised the stakes and we're now punching our weight with pride and enjoying the limelight from our recent cup runs and promotion success of last season.

Another good blog, it sounded as if we were all over them a part from the 10 or so minutes after half time. Although it sounds as if you still managed to have a good time.

Was there a decent Rook following, we had around 50 at both Thurrock and Dover?

Anyway I'm just glad I've still got a club to watch on a Saturday other than Everton on a T.V screeen. Well done Ibbo and everyone else involved!!!

Please tell Dave that Staines, although administered by Surrey County Council since the local government shake up in the early to mid sixties, is and always will be, in Middlesex! Best regards. Alan STFC Supporter.

It'll be my pleasure Mr Wright. I'll remind him on the way to Kidderminster tomorrow.