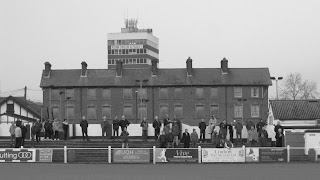 Maidenhead 1-1 Lewes (05:12:09)
- click photos to enlarge image -
I defy anyone who has had the pleasure of visiting York Road, Maidenhead for the first time, not to walk away with a smug grin on their face. That is because you'll be armed with the knowledge that you've just stepped a shoe in the oldest continuously used senior football ground in the world.
The ground has been in use since 1871 and as such it's assured of a place in the football history books for some time to come. I'm not too sure if it was this fact or the rumour of a lap dancing club on the corner of said ground that bolstered our numbers to 5 (five!) on the 09:49 EFW football special from Sussex to Berkshire on this blustery, chilly December day.
A quick romp through Wikipedia also reveals that aside from their "world famous railway bridge", Maidenhead was also the place actress and sex symbol Diana Dors resided in for most of her life. I include this only because she was born 'Diana Mary Fluck' which is pretty marvellous I think you'll agree?
Oldest ground, railway bridge, Mrs Fluck and a lap dancing club. It was all too much for us, we needed a sit down and moreover a beer. So, after our arrival in town - three hours before kick off - we treated ourselves to a pint in Noctors. A sign in there asked us to drink responsibly....but quickly. We duly obliged and moved onto The White Horse where our pre-match meal was quaffed for the princely sum of £2.50. Must grumble really, even if it was freshly sourced from Iceland.
There wasn't much else around the High Street to get excited about so we pitched up at York Road early doors, just as the actual doors were opening. Again, we were the first to arrive. Inside the Magpies newly refurbished (now there's a thought) clubhouse, we were met by their Director Steve Jinman. Putting my professional hat on for a moment I managed to interview him:
York Road is famously the oldest continuously used senior ground in the world. It's old but is it gold? Definitely not gold. Used to be wood but that bit burnt down. Probably something that might be looked on fondly in the past but a bit past its sell by date so coal?

What is the best thing about supporting Maidenhead? Handy for the station and the pubs! Seriously great to be part of a community that stretches back so far and gives me the opportunity to do my bit to keep it going plus meet lots of wonderful people along the way from other clubs.

How are the finances at the club, are you in rude health? Not rude health more of an even keel. Our owner pledged to make and keep the club debt free when he took over in 2005 and four years on he's been good to his word. Low crowds mean we're hardly flush, but we're humbly poor.

We like a beer with our football at EFW, what is the clubhouse like at the ground?
Basic and functional. Based in the town centre we cannot compete with the likes of Wetherspoons etc a few minutes walk away so only freeview and your standard keg lagers and bitters. Our bar staff are very popular though. 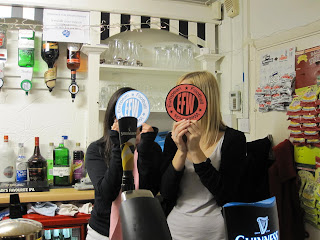 The "popular" duo.
Who are The Magpies rivals? Traditionally Slough and Wycombe but their contrasting fortunes mean we've had to little chance to go head to head in recent years. Some people try to make a go of derbies with Marlow and Windsor but I can't take either seriously as senior clubs. In terms of the league Basingstoke and Hayes qualify as our rivals of recent years but there's no underlying passion even if the crowds are bigger than average. Sadly I can remember when our local derby in the league was against Flackwell Heath which is shameful.

What's been the greatest single moment in Maidenhead's long history? I guess reaching the FA Cup quarter finals in three successive seasons in the 1870s but as this is so long ago it doesn't seem real. Our Cup record since has been pretty poor and the best moment came in 2006 in the first round when we held Stafford to a draw with only 9 men. We lost the replay at York Road but the anticipation and huge crowd made it an exciting 10 days. Beating Merthyr a few weeks before to qualify for the first round for the first time in 35 years (neatly coinciding with my lifetime). My personal highlight was topping the Blue Square South for the first time in September 2008. I still have a print out of the league table on my noticeboard at work! 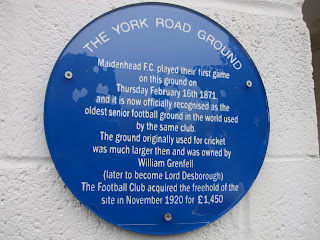 And if you know your history... 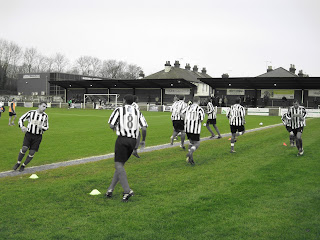 The Magpies warm up their collective cockles. 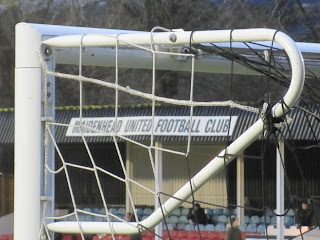 Any football fan worth their salt will now be thinking 'Sir Trevor Brooking, Népstadion, Budapest, 1981'. 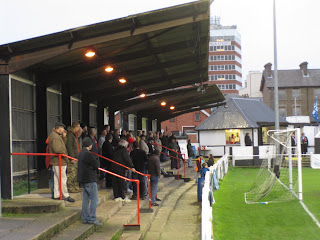 Healthy away support for the Rooks.
Onto the match and the first half could best be described as "cagey" - this is the polite way of saying it was a bit dull. The highlight on the pitch was a Tim Rivers effort which shaved the post after good work down the left from Lewes debutant Brinky Brinkhurst. Off it, Magpies keeper Chris Tardif took time out during the game to induct himself into the EFW Hall of Fame. He posed for a photo which brought him a round of applause from the healthy contingent of travelling Rooks. Five FIFA stars to you Mr Tardif - top man. 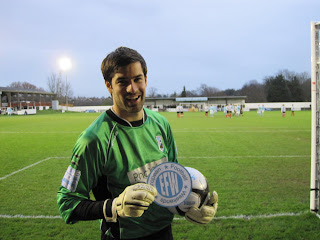 Chris Tardif takes time out during the match to join the EFW team. 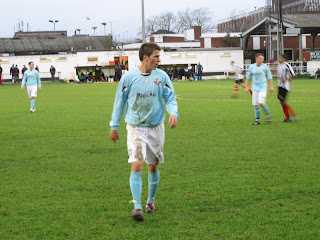 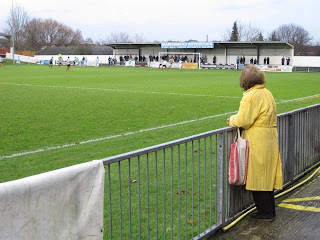 See you in the Honey Pot later love!?
Just before the hour mark Lewes took the lead. David Wheeler put through Kane Louis who jinked this way and that before unleashing a powerful effort that our friend Tardif only parried out to the gleeful Joe Keehan. He thumped home to send the away end into pandemonium - star jumps seemed to be the celebration of choice.
Maidenhead appeared to be strangely subdued. The locals pinned this to the fact that highly influential midfielder Will Hendry had moved onto AFC Wimbledon after his fine work had attracted a whole host of scouts to York Road. Keiron Lloyed J Minto St Aimie was also off the pace. Kieron has been a huge success everywhere he's played but unfortunately is always run out of town by angry mothers upset at the 1GBP per letter cost of having little Timmy's favourite players name embroidered on the back of his replica jersey.

15 minutes later I was glad it was all over for Dave Clarke, who ironically had a hit with 'Glad All Over'. That was him wasn't it? Anyway, he received his marching orders after a bit of a melee in the centre circle. The home side reduced to ten men. What could possibly go wrong? This was going to be our first win on the road this season. Hold on though, down to ten men, how often it is that the team with a man short blah blah blah.... 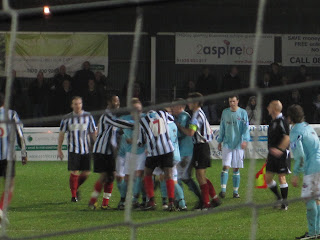 A (Roger) Melee. Dave Clarke isn't so glad it's all over - early bath son.
And so it happened. Lewes hit the wall - Alex Wall. Maidenhead had been revitalised by Mr Wall after he'd come on as a late substitute. He was annoyingly fantastic and turned the game on its head (ouch). Incredibly, this was the fifth time he'd come off the bench to score this season. His deflected free kick stole two of the three points from the Rooks nest. 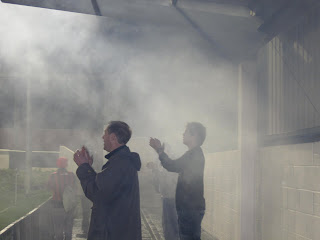 The Lewes Lunatic Fringe give their heroes an ULTRA special reception. 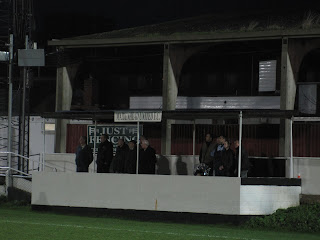 The San Siro of Berkshire. 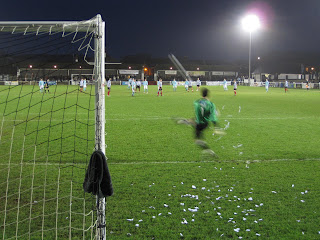 Our hero in action.

So what of the lap dancing club then? Well, as we left the clubhouse (we were the last to leave) so did the Maidenhead board of directors. They left the boardroom and stepped straight into the Honey Pot. From one Gentleman's Club to another. No suggestion of any wrong doing of course. It was over £4 a pint inside which apparently keeps out the riff raff. MUFC don't hide their association with that place - far from it. They have an advert in the match programme and indeed you can gain free entry with said programme into said club! 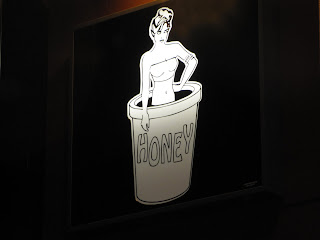 Tell them about the honey mummy. 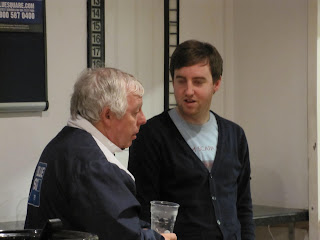 Mr Brook engages in a post match chat with Lewes gaffer Ibbo.
On the train home a bout of giggling ensued as I videoed Cynical Dave doing his - soon to be - world famous impressions of Woy Hodgson, Alan Curbishley and Sir Trevor Brooking. If this video isn't a You Tube hit I shall eat my bobble hat. Video 1 can be seen by CLICKING ME and the second effort can be giggled at by CLICKING ME. 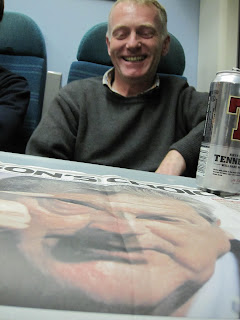 Cynical and Woy.
Not the best game of football we'll ever see but again that didn't stop us having the time our young(ish) lives. Good old non league football and good old life. Cheers!
- For more photos from the day CLICK ME -

Great blog, I couldn't make this one, but I'm pretty sure I'll be back in full voice for next week's trip to Hampton and Richmond. Have the Lewes lunatic fringe got anything planned for next week's FA trophy outing fireworks, banners, flares, wavers etc?

This email came into to EFW Towers today from the director at MUFC:

Glad you enjoyed your day out. Two post scripts to your blog.In the 70s our chairman had some showbiz connections and he got a few of the local ones down to York Road including Michael Parkinson, Jack Douglas and of course Diana Dors. Some of the programmes of the time are like a mid 70s version of Heat!

Secondly would I be correct in assuming that leading the MU party to the Honeypot was our match secretary Roy Bannister?
http://www.pitchero.com/clubs/maidenheadunited/?primary=aboutus&secondary=clubofficials
Although he is a regular in there and a good friend of the landlord he insists he has no interest in the girls! (yes it was him - Ed).

Good luck for the rest of the season.

Hi there, enjoyed reading about your visit to the Fortress York Road yesterday! now off to read some more of your posts. I've been doing some "groundhopping" of my own this season through the FA Cup, you can read about it on www.facuptour2009.blogspot.com

Just caught up with this - I was regular at York Road in the Eighties. The old grandstand burned down in slightly suspicious circumstances in that era, leaving the stadium as an utterly featureless ensemble. I doubt that Maidenhead would ever be allowed to go up unless they went for a groundshare so their time in Conference South will come to an end at some point.