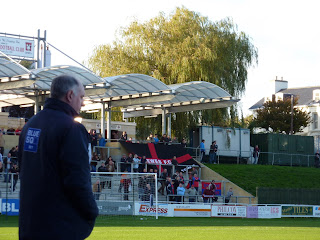 - click on photos to enlarge image -
If you've had the misfortune to have read some of my ramblings on European football, you'll realise by now that most clubs abroad have a 'friendship' with at least one other club. St Etienne are best mates with Bordeaux, Pogoń Szczecin regularly get into bed with Legia Warsaw and last week we discovered that Rot-Weiss Essen are all over Werder Bremen.

To my knowledge, this isn't commonplace in England but I'd like to think that if it was - Lewes would be paired up with Hampton and Richmond Borough. When EFW pitched up at the Beveree earlier on in the year, we were treated like royalty. We were met by the press officer, given a tour around their ground, afforded time with both gaffer Alan Devonshire and President Alan Simpson OBE and given a warm welcome by the fans, many of whom have remained friends since that day.

This is why, when it crossed our minds to sponsor a match ball for this season, one game leaped off the fixture list here at EFW Towers. So, we were happy to put our name to this fixture as we once more entered the murky world of football sponsorship. I would just like to reassure Rooks fans at this juncture that despite repeated rumours; the wonderfully named Dripping Pan isn't going to be re-branded and called the DrippingPan@www.europeanfootballweekends.co.uk anytime soon. We'll leave the circus act to Dorty Newcastle United shall we!?

So to the match (well pre-match, we are EFW after all) and on this fine Autumnal day in East Sussex, Cynical and I arrived in town early doors and we cemented our friendship with our pals from Hampton, Passport to Football's Stuart Fuller and a cast of tens over a little thing we like to call 'beer'. As we were representing the company (EFW), Dave and I pitched up sporting a pair of matching suits. Anything for a giggle eh!?
After we'd shown the Hampton throng around some of the finer establishments in town we walked (some staggered) into the clubhouse at the ground to pump some much needed funds into the actual club in exchange for beer. In non-league clubhouses, you'll more often than not find a fixtures board mounted on the wall. For once, the one at Lewes hadn't been updated. Step forwards Mr Fuller and I who fulfilled a lifetimes ambition - up there with swimming with dolphins - and rectified the situation post haste. And relax. 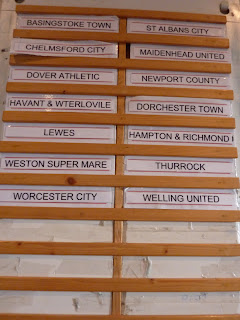 Evidence of our fine work, next up - swimming with dolphins. 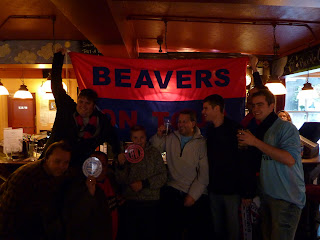 Eager Beavers.
The next thing I knew I was standing on the terrace having my photo taken with a fellow besuited chap. It was only rotund, mustachioed, former FA chief executive Brian Barwick. He'd just joined the Hampton board of directors and celebrated his good work by joining the EFW Hall of Fame. EFW and the FA chumming it up on the terraces? File your complaints to the usual address please. 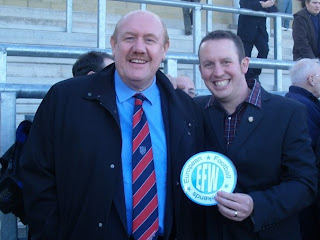 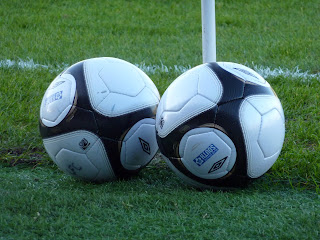 The balls are sponsored - tick. 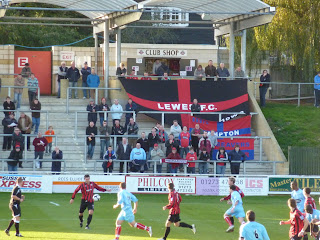 The Lewes and Hampton 'love in' continues on the terraces.
Pleasingly, Lewes chose this day to turn in one of their best performances of the season. The only goal of the game came following an Arsenal type move with eye-catching passes being knocked all around the park. With cries of OLE echoing around the Pan (well, sort of) the ball - sponsored by EFW - found its way out to Wheeler (obviously) and he delivered a match winning pass through to Rivers who gleefully tapped in to earn the Rooks only their second win of the season.
The stand out performance on the park came from Lewes keeper Rikki Banks. He was a ball magnet all afternoon. He is easily the most improved player at the club and Cynical and I concluded afterwards that his recent good form must be down to the fact he's been reading one of our infamous self esteem books. Safest hands in soccer? I think so. 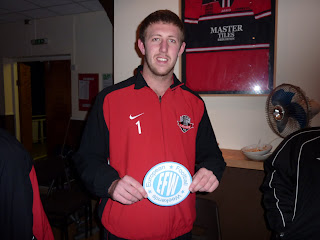 Safest hands in Soccer. EFW Man of the Match Rikki Banks.
Being match ball sponsors (yes I think we've established that - Ed) we got to lord it up in the boardroom both at half-time and after the final whistle. We got to chat with the genial Lewes chairman Martin Elliot. He regaled us with some of the 'joys' of running a non-league club aligned with the present financial climate but rest assured, he has the best interests of Lewes FC at heart.
In the boardroom you also get to see the work of the many volunteers, without whom Lewes would not exist. Peter and Dorothy (Dot to her mates) serve up a spread that wouldn't look out of place at Lords - including home made cakes. Match programme editor and website Guru James Boyes can also be seen beavering away at his laptop. Talking of Beavers, James was rightfully pleased with his good work on the official website report whereby he managed to crowbar in the words "snatch" and "Beavers" into his headline. least not forget that the management team at the club also work for nothing - someone open the windows! 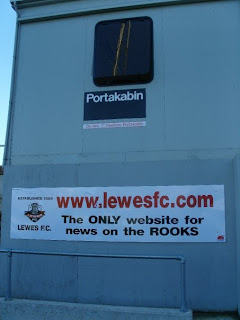 The Lewes boardroom, no really, it is! 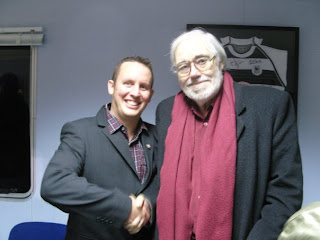 My hero! Comedy legend Alan Simspon OBE.
Now then, down to business. To function properly and to make money, Lewes FC needs a bigger and better clubhouse. The current one is widely regarded as not being good enough. Aside from fireworks/bonfire night, what is the towns most famous export? It has to be beer, moreover Harveys beer and it's they who I've got in mind with my cunning plan. They need to get more involved in the club. I'm drafting a letter as we speak. My plan - which has to be said is a 'pie in the sky' one - is to get them to assist in making the clubhouse at the Dripping Pan one of the best in Europe. Lewes FC + Dripping Pan + Harveys = winning formula surely!? This time next year..... 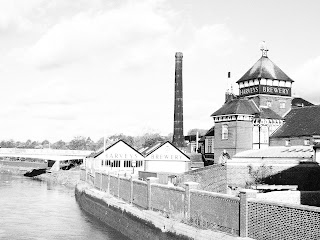 Here's to our new clubhouse - possibly.
- feel free to comment below -

Great blog as usual, the H&R fans weren't impressed by the lack of stewarding at the Pan, regarding the bangers incident (was quite funny).
Rikki Banks was excellent I didn't follow the Rooks last season, but I've heard also he's made a vast improvement this year. The whole team were fantastic, great day, and as gooder atmosphere as I've heard this season from the Rooks liking the flag at the end as well.

I did think the bangers were ever so slightly rude but one of the H & R fans really overreacted unfortunately hence someone threatening to light a sparkler. Now that was really rude! In fairness there have been no complaints about the incident on the H & R forum and the fans who came in the bar afterwards were fine about it so it can be filed "storm in a teacup" I hope.

Great match blog as usual. You picked a great match to sponsor!