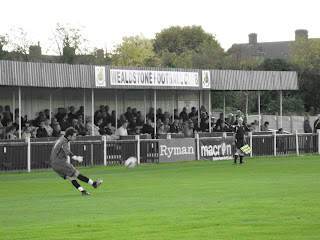 Wealdstone 3-0 Lewes (10:10:09)
- click on photos to enlarge image -
Following the Rooks last gasp win over Leatherhead in the last round, we were on the march with Ibbo's army, we were off to Wembley - well almost. Grosvenor Vale, the newish home to Wealdstone FC is only 9.8 miles from Wembley Stadium. Ultimately, that is the closest Lewes will be getting to the home of football as the Stones unceremoniously dumped them out of the FA Cup courtesy of a good hiding. Three goals without reply. Whoops!

Wealdstone - unlike Lewes - entered the match in a run of tremendous form. Despite being a division below it was they who were bleating on about 'guarding against complacency' in the pre-match blurb. These are happy days for Wealdstone. They've now settled in their new home in Ruislip, they're getting very healthy crowds and they've got previous players Vinny Jones and Stuart Pearce on speed dial should they need to top of their funds with some after dinner speeches.

In researching (I know!) Wealdstone FC, I couldn't get past one of the best websites in the business. The Fat Stones website is sadly no longer active. It's still there though for those who want to see match stick reincarnations of old matches amongst other things (yes please - Ed). The chap who ran it (Jon) now spends his time contributing to the match day programme and on this sunny day in West London, he also took time out to join us in a few pre-match bevingtons. 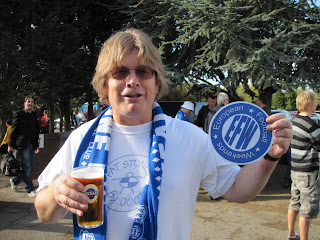 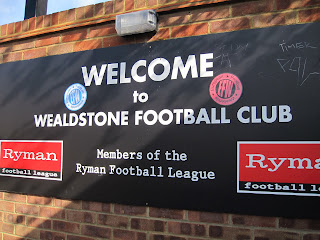 A warm welcome for EFW. 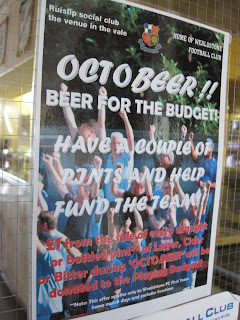 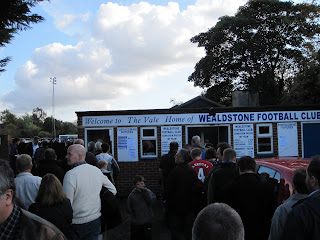 Queues o'clock at the Vale. FA Cup fever present - tick.
By now you'll be familiar with the EFW pre-match routine; aim to be the first in the clubhouse, hand used fivers over the bar, eat, drink, be merry and - like The Littlest Hobbo - try and get into a few mischievous adventures. Why change a winning formula!?

We arrived three hours early to the Vale, just as ESPN were laying out the cables for the live feed of the match to South-East Asia, a continent gripped with FA Cup fever. You can picture the scene back there with whole villages gathered around a black and white portable savouring every moment. There was also rumours that the match was being beamed on a pay-per-view internet basis but surely that would never happen - not in my lifetime anyway.

In the (enormous) clubhouse we were greeted by Stones chairman Howard Krais. He immediately earned 5 FIFA stars by pouring us a couple of pints and offering us a bacon butty. After marvelling at the plentiful display of memorabilia in the three different bars, Cynical and I then positioned ourselves in the best one. Then a besuited chap came and pinned up a 'boardroom' sign on the door. The normal boardroom they use for matches didn't meet FA Cup requirements (something about not having a toilet within 20 yards) and so they had to relocate for the afternoon. Pre-match drinks in the boardroom then, don't mind if we do!

Our quest to pump money into grass roots football couldn't have been better timed at Wealdstone. Our visit coincided with 'Octo-beer'. This month, £1 of every pint sunk in their bar goes towards the playing budget. Cynical and I probably contributed enough for them to procure at least one new central defender. They certainly don't need another No.8. Chris O'leary the current owner of that shirt ran Lewes ragged.

There were not enough expletives that could sum up the Lewes performance on the pitch. They were out fought, classed and muscled in every department. Other than that they were all over Wealdstone like a cheap suit. It was one way traffic and if it hadn't of been for a couple of wonder saves from Riki Banks, Lewes would have been on the end of their heaviest ever defeat. So fair play to the home team, they are now £7,500 better off, into the hat for the next round and second in their league to boot. How the other half live eh!?

Facing three bars full of gloating Stones fans wasn't our idea of too much fun afterwards. So after a quick one in the adjacent Ruislip Ruby Club it was back to Brighton - passing Wembley Stadium on the way (here's what you could have won) - and back to EFW HQ to celebrate the landlords 60th birthday with what can only be described as far too much Guinness. Happy birthday Graham!

Click to enlarge this image and have fun spotting the man with two heads in the process. 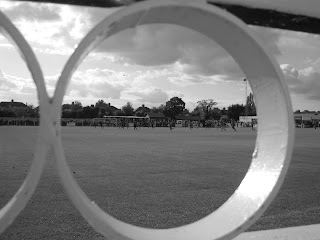 A bit arty after a couple of pints Lasty! Nae bad pal. 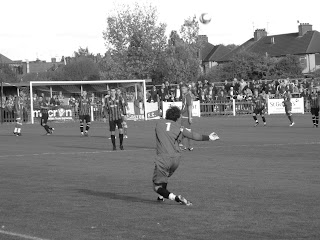 Stones keeper Sean Thomas has a shot from 80 yards. 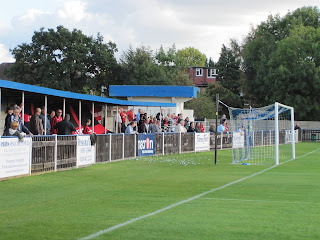 The travelling army of Rooks. 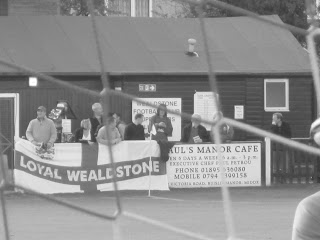 Couldn't see "the man with two heads" in the photo, mostly because of "the man with only three quarters of a head" in the middle with the match programme in his back pocket. Time traveller? Photoshop disaster? Come to think of it, there's something weird going on with the guy next to the left goal post.

Great read as usual, keep up the good work!

Anon - cheers, whoever you are. V. kind.

Mr Dunkeld - Men with two heads, three quarters of a head, time travellers as well. These are the things one finds in the non-league. It's the way forwards and no mistake.

Actual reasoning is that my 'stitch assist' doofer on the camera is quite hard to see and match up after a couple of pints. If I was a professional, I'd use a tripod (and not drink). As a bungling amateur though - I just click away and hope for the best.