It's a hoot hoot at Waltons Park* 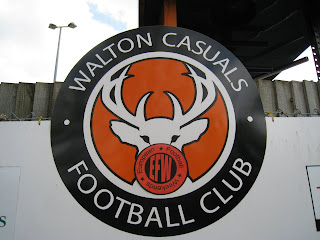 Regular readers will have established by now that the EFW team are seldom reluctant to spurn the opportunity of a pre match ale. Even by our own high standards though, the plan for this Walton-on-Thames local derby bordered on the optimistic/foolhardy. The plan - dreamt up at EFW HQ - was to kick off at Walton and Hersham's ground early doors and visit every pub between there and Walton Casuals place before the match. A simple plan no!?

So Cynical Dave, Big Deaks and I pitched up in Walton-on-Thames just prior to opening time on this Easter Monday after an extended journey up from Brighton on the train. Extended due to rail works and an eye opener in places; Byfleet and New Haw Railway Station has to be seen to be believed (in the negative sense).

After a visit to Walton and Hersham's ground and sinking beers in seven pre-match pubs (for details CLICK ME) it was onto the match itself. They won't thank me for reminding them but the last time we covered a Walton and Hersham match, they got thumped 5-0 by Merstham. Futhermore - and how is this for a link - Merstham gaffer Mick Sullivan was the man who revived the fortunes of Walton Casuals several years earlier. Helping them on their way to where they find themselves now; the dizzy heights of the Ryman Division 1 South with local derbies to be savoured and all sorts.

We were meet upon our arrival by regular Sky Sports pundit, Ex-West Ham United player, Sun columnist and now Director of football at Walton Casuals - Tony Gale. Tony talked to us about plans to extend the clubhouse area and develop the ground via funding from the football foundation. Plans include promoting football at all levels in the area and as such Walton Casuals -helped by our best mate Galesy - look destined for greater things. Good luck to them. 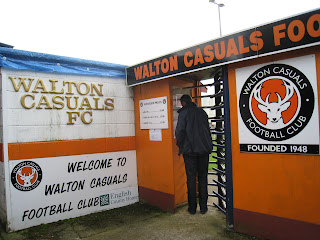 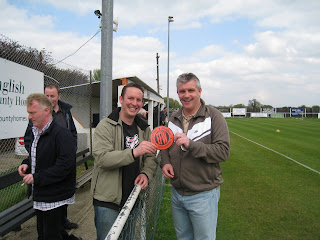 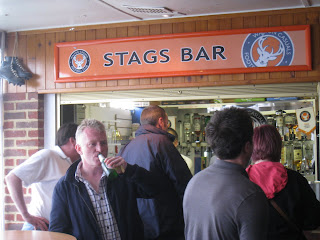 I'd been tipped off on two Walton Casuals players prior to my arrival. Ultra competitive, central midfielder and club captain Craig Lewington and Anthony Gale - son of our best mate Tony Gale. Neither disappointed us during this match played in sultry conditions. Lewington is The Stags player of the season - it's not hard to see why - he was immense. Anthony on the other hand scored the goal which ultimately settled this match late on by racing onto a through pass from Patrick Damali and prodding home the winner. This virtually secured Casuals place in this league for next season.

Non league football is all about characters. For most of this game, I stood next to a chap called Fred. He was in his 70's, had been following Casuals in their various guises since the year dot and boy - did he like a moan. Fred liked what he said and he bloody well said what he liked. He was (nearly) as cynical as Cynical Dave! Whilst I was chatting with Fred, Walton Casuals scored. Do you think that made him happy!? Did it 'eck as like. He had a pop at the players for overly celebrating the goal. "In my day, it was a handshake at the most and get on with it" he shouted. After the game, a fed up Fred went and collected each corner flag shaking his head in the process. Fred - we salute you Sir! 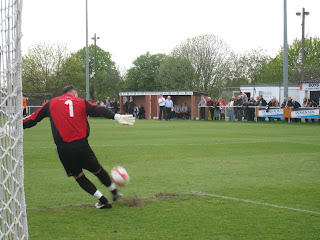 Casuals keeper Craig Bradshaw was 'commanding between the sticks' as always. 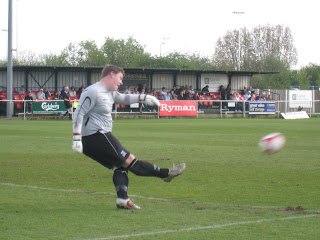 The Swans keeper who some wag referred to as being 'the size of a bus'. 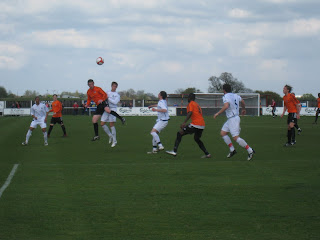 Players form an orderly queue for a header. 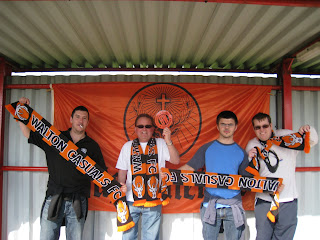 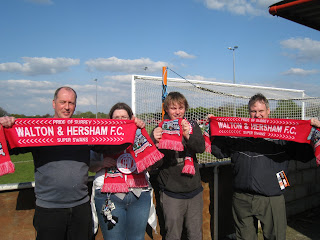 The Walton and Hersham Ultras. 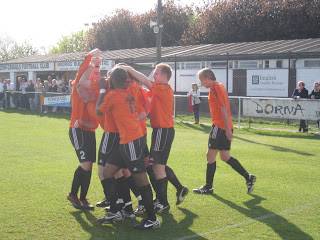 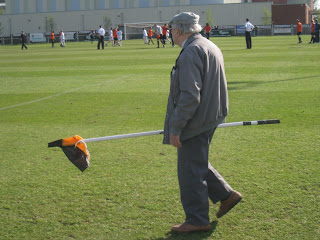 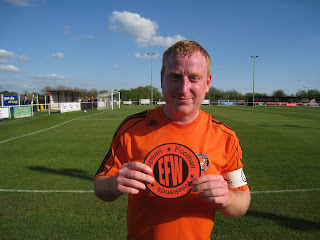 After the match we headed back into town and visited the one pub we hadn't done before the match. The Ashley Park Hotel next to Walton-on-Thames Station. It was a typical hotel bar - the type favoured by Alan Partridge. Upon entry a hue of lightly battered, processed food filled the room. That was our last pint in Walton and with that we were off - back to EFW HQ to reflect on what wasn't the best match we'd ever seen but one of the best days of the season. Good old life!

* I'd better explain the headline. For those of you who didn't live in the Meridian TV during the 80's, Paultons Park used to advertise roughly every 25 seconds on local tv - telling us that it was indeed a 'hoot hoot' at Paultons Park with "so much to see and do for all the family". Way too much fun for one day? Rather! 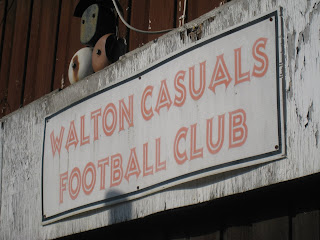 So pleased that you came to Walton for the big Walton derby especialy as we needed the points! You welcome any time but especialy when we need the points! Never mind the flesh pots of Barca and Milan come to Walton and meet Fred and the Ultras! Thanks for putting us on the map.
Terry,Neil,Harry and Harry AKA The Walton Ultras.