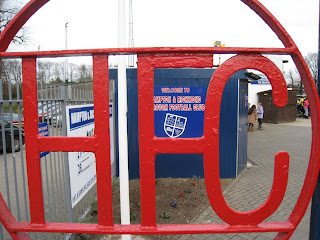 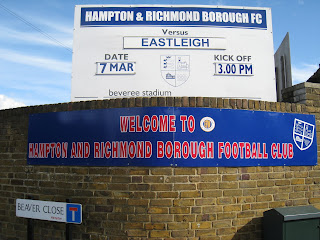 Hampton and Richmond 2-1 Eastleigh (07:03:09)
The Conference South contains an embarrassment of riches. Let me take you through some of the runners and riders for this match for example:

Alan Simpson OBE - President of Hampton and Richmond Borough FC. Alan co-wrote one of Britain's best sitcoms of all time 'Steptoe and Son' and has worked with and written for - amongst others - Tony Hancock, Spike Milligan, Eric Sykes and Paul Merton.

Alan Devonshire - Manager of Hampton and Richmond. This Alan played for West Ham United for 24 (twenty-four!) years in the halcyon days when The Hammers would take a punt on a fork-lift driver for Hoover. He was famously sick -with nerves - on his first day of training at West Ham and played a (criminally low) eight times for England and once had a punch up with Alvin Martin at Wrexham.

Ian Baird - Manager of Eastleigh FC. Ian played for Boro, Leeds, Pompey, Brighton etc etc during the 80's/90's and celebrated Brighton's last ever game at the Goldstone by having an exchange of punches with Doncaster Rovers Darren Moore.

Alan Simpson OBE, Paul Merton (often seen at this ground by the way), Tony Hancock!? With this comedic theme running through the heart of the club, it's hardly surprising that their nickname is 'The Beavers' which is a euphemism for....well you know what *snigger*.

Up until Tuesday night, all was going swimmingly well for Hampton and Richmond. Nine wins on the spin had seen them mount the biggest title challenge since Danny Shittu tried to write his autobiography. On that rainy Tuesday night at the Beveree Stadium, Newport County came and ruffled their plumage. They took an unlikely three points away with them leaving H&RB just behind AFC Wimbledon in their pursuit of Conference footer.

To explain that defeat one simply has to thumb through the rules of football. Prior to the match Beavers boss Alan Devonshire had been rewarded for his sterling work with a manager of the month gong. Our friends from overseas might not be aware of one of the quirkier rules of English football. Law 12, Section 1, paragraph 6 reads thus: Any teams whose manager has just won the manager of the month award must not - under any circumstances - win their next match.

EFW regulars Cynical Dave, Big Deaks and I made our way up from Brighton early doors and arrived just in the nick of time (three hours) before kick off. It was a crisp, clear, spring day - ideal for a few pints coupled with the beautiful game. I'd had a haircut for the occasion, Cynical had donned his suit jacket and Big Deaks had pulled a new shirt of the peg. Maybe it's these little touches that have led people in the past to refer to us as a "credit to non league football" (Are you still harping on about that!? - Ed).

Upon our arrival at the ground, gateman Larry Dann (who used to be in the Bill!) ushered us in before we were met by Hampton and Richmond media guru Les Rance. Les was celebrating his 60th birthday. It didn't stop him from giving us a potted history of the club during a most enjoyable stroll around the ground. Les also furnished us with programmes, teamsheets, introduced us to Alan Devonshire and invited us to the boardroom to meet the legend that is Alan Simpson OBE. Les was a gift that kept giving - happy birthday mate!

In the boardroom Simpson and I chatted merrily over a cup of coffee and a selection of fine biscuits. He's been at Hampton for 41 years. He used to watch Brentford and Fulham on alternate weeks but one afternoon - in 1968 - with neither team at home he strolled down to his nearest club Hampton FC. He's never looked back since. He told me that it gave him "equal pleasure" receiving his OBE at the palace and having a stand named after him at The Bev. The last time he watched an episode of Steptoe and Son was last year at Paul Merton's house in Kent during Merton's 50th birthday celebrations. He wouldn't cross to road to see Arsenal play Man Utd (a comment which later prompted Cynical Dave to give him a cuddle) and that he'd been in attendance at England's World Cup Quarter, Semi and Final in 1996 with his co-writer Ray Galton, although Ray - not having a sporting bone in his body - denies all knowledge of ever having been there. He talked candidly about Sid James, Kenneth Williams, Tony Hancock, Cilla Black and about how Franky Howard could engage a room with his charm and personality. If you are reading this Alan - I can't thank you enough for your time and wittertainment. If your reading this and you're not Alan then let me tell you that DVDs, CDs etc of Hancocks Half Hour and Steptoe and Son are available at all good - and some bad -retail outlets. 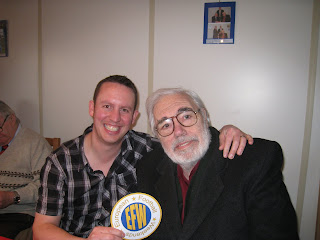 Myself (Danny) and Alan Simpson OBE 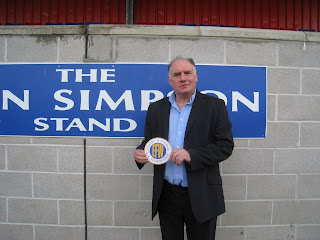 Back in the clubs own (Hammond's) Bar, Cynical and Deaks were chatting with Eastleigh, incognito AFC Wimbledon fans as well as supporters of the Beavers. The self acclaimed 'fat git' and his wife reminisced about previous trips to St Pauli, tipped us off on Prague as a future EFW destination and waxed lyrical about the trees surrounding the ground. 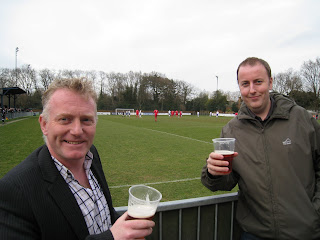 Cynical and Big Deaks
What else!? Oh yes, the game. Just the three red cards and a Roy of the Roversesque last minute winner for the home side! One of the joys of non league football is being able to walk around the ground whilst the game is in progress. Here's a tip for you - position yourself between the home and away dug outs for maximum entertainment. We were treated to a verbal volley of abuse/encouragement from Eastleigh coach Matt Gray, Ian Baird telling the referee he's had the "worst performance he's ever seen" and even - towards the end - the previously passive Alan Devonshire having kittens on the bench. 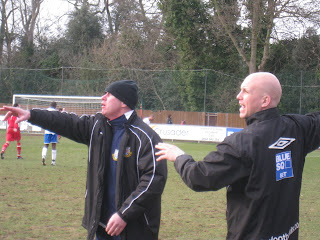 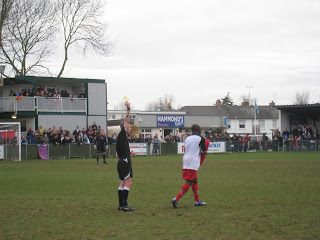 Yellow card for having the cheek to celebrate a goal 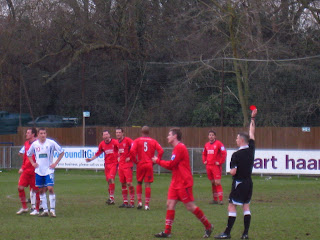 Early bath for you son 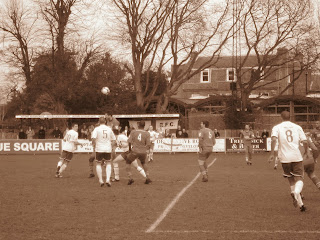 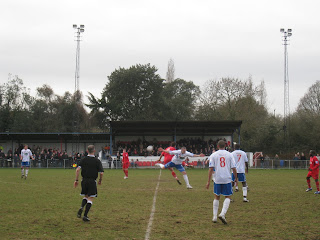 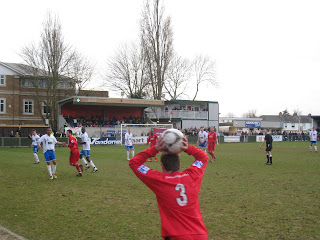 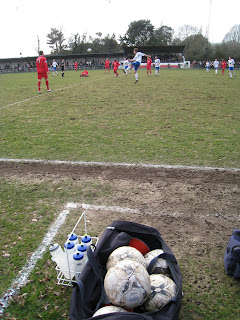 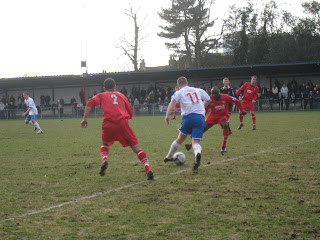 I have to award full marks at this juncture to the Eastleigh fans. They gave their club tremendous backing during the 90 minutes. Hampton fans responded towards the end with a few chants of their own. With this being non-league football though any tension between to two sets of supporters was immediately forgotten after the match as they shared a beer or three in the bar afterwards. Football as it should be!? I think so. 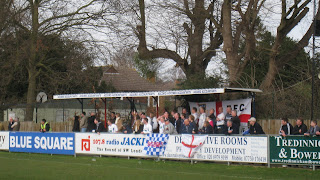 The vocal element of the away following 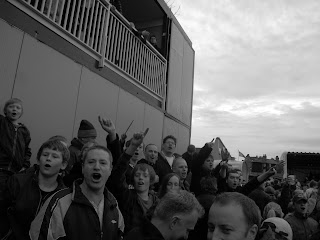 Hampton and Richmond fans in celebratory mode
Amusingly, Hampton and Richmond's last minute winner occurred whilst Big Deaks and Cynical Dave were 'in discussion' with one of members of the Eastleigh backroom staff about one of the sendings off. 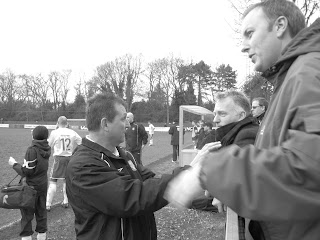 Big Deaks and Cynical 'in discussion' with a chap from Eastleigh 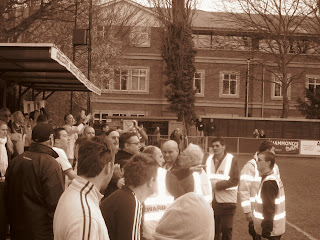 In the boardroom after the game (check us out) the good news came both thick and fast. First and foremost news reached us that EFW Facebook member and friend Neil Ford and his girlfriend Kelly are expecting their first baby. Secondly, AFC Wimbledon had only drew their match with Weston-super-Mare meaning that H&R had closed the gap at the top to just five points and thirdly, Alan Devonshire's wife was on hand serving us wines, beers, spirits etc seriously what's not to like!? 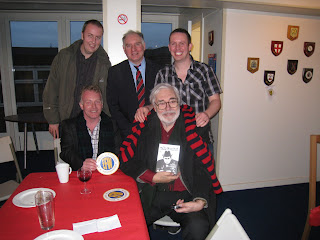 Team photo in the boardroom
Again we chatted with both Alan's and Cynical entertained us all with his - very passable - impressions of Roy Hodgson, Alan Curbishley and Trevor Brooking. Deaks was in the corner chatting with the three match officials about the sendings off. He concluded that two out of the three were correct and their conversation ended up amicably with handshakes all round.

To cap a miserable day of for Eastleigh boss Ian Baird, we saw him afterwards in the car park with his car in bits. It didn't stop him from coming over and having a chat though. During the match he came across fiery tempered lunatic. Upon meeting him though I can confirm that he is officially as nice as pie. 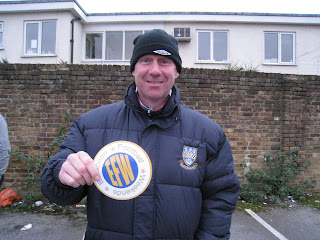 Ian Baird
Regular readers will know that no domestic day out is complete without a visit to EFW HQ. So we left the good folk of Hampton to celebrate Les's 60th birthday in style and returned home to Brighton to discuss what had been a memorable day out over a few more pints. If you are ever in the vicinity of Hampton - I think you know what to do - pay them a visit. When I got home and switched on the telly, what should be on (UK Gold)!? Steptoe and Son of course. Cheers! 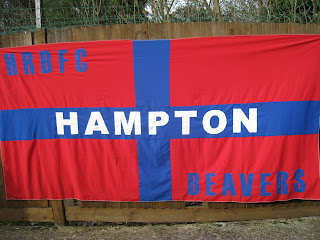 Not to sure about this Ian Baird being a nice man stuff though! ;-)