In the absence of any European Football Weekends until we go to Istanbul, Turkey in a couple of weeks time - I thought I'd introduce a 'meet the team' feature. So here are a few questions that some of the EFW regulars have answered. Feel free to ask us a question yourself: 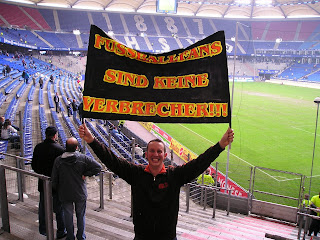 I love the fact that most fans abroad treat every game like a cup final. I find you are almost guaranteed a good atmosphere and what’s more it only costs a fraction of the price of an English game to get in. At home, I don’t sing at matches anymore whereas abroad I sing along in another language for the full 90 minutes. I also love sitting in a pub afterwards talking all kinds of rubbish to all kinds of people.

Two weeks of football with eight of my best mates at Euro 2004 in will take some beating. Five games, genuinely friendly locals, nice food, beautiful beaches and cold beers. What was not to like!?

Also being in the away end as Borussia Dortmund beat their local and hated rivals Schalke 04 for the first time in umpty thrumpty years will live long in the Gordon memory Banks. What’s more, it was my stag do and all of my mates had come along for the ride.

is my favourite City for the food, beer, football and culture. has never let us down as a great base for German football.

From the outside the Allianz Arena () looks stunning. It also has a proper beer hall inside with actual glasses (no plastic nonsense) and beer to die for. Inside it’s just like any other new stadium of the same size. Give me some old skool floodlights and couple of terraces any day. To that end places like Alemmania Aachen and Kickers Offenbach fit the bill very nicely thankyou.

– we keep trying to go to new countries for football but ticks every box every time.

Borussia Dormund. Their fans have always been great to us and I’m still in contact with quite a few of them. Aside from them I am able to switch my allegiance at the drop of a hat depending on where we are and whom we meet.

We once went to see v in . Nobody had catered for there being a Belgian beer festival in the middle of the city. After spending the afternoon there drinking unbelievably nice beers everything became a bit of a blur. We did try and get to the game but the trams were not working properly, there was an issue with tickets and in the end we gave up and returned to the beer festival.

There is nowhere I wouldn’t consider. I'd like to see some games in a few new countries.

The aforementioned stag night in . Singing with a Rod Stewart look-alike German landlord in . One Portuguese landlord stuffing three of us in the boot of his car to give us a lift home. My mate Binsy entertaining a pub full of Portuguese/Czechs by playing a tune with his flip flops on the table. The Borussia Dortmund ultras party and lots more.

Best game you have seen!?

The game between Holland and the Czech Republic (3-2) at Euro 2004 was astonishing in terms of quality entertainment, skill and goals. England v Portgual (2-3) at Euro 2000 was great and Real Madrid v Valencia (2-3) deserves a mention. Basically any game that finishes 3-2 by the looks of things! 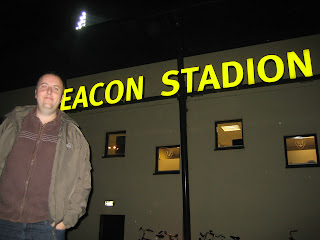 What's not to like ? The main thing to like is the friendly welcome we get from 99.9% of foreign fans. You never know what you are going to see at some of these places and they always come up with something different.

Difficult to say but probably the ones with 3 games in 3 days, They were tiring but very enjoyable. Dortmund was probably my favourite as the Unity Ultras Party was fantastic.

Madrid or Munich. Madrid is visually pleasing but Munich quenches the thirst better. Cologne is up there.

Impossible to answer. Barca, Real Madrid and also SpVgg Unterhaching in the lower divisions as they have a great set up. For old skool it has to be Alemannia Aachen or Kickers Offenbach.

Germany by a mile.

A bit for Dortmund as they do a lot for us when we go.

Only when there is no toilet on the train and you have been on the Weiss Bier all day.

I would like to try a few different countries, maybe Sweden & Denmark. I need to go to Bayer Leverkusen as I have been past it on the train a hundred times.

Either the night after Schalke 1 Dortmund 2 or the Unity Party again. Both were classics. Saturday night in Munich was not bad.

Loads to choose from, I would say Dortmund, Borrusia Monchengladbach, Aachen and Heracles.

Best game you have seen?

Any funny stories from a EFW?

When we went to stay in Cologne and didn't realise there was a massive annual fancy dress party celebrating the end of World War II. We got stuck in the middle of it and saw someone dressed as a football pitch.

The five hour train journey from Bucharest to Constanta for Romania v Holland. It pissed down all day and then we had to get back on the train at 4am. Thanks to the man selling cheap beers on the train, he was a hero.

The players fight between Longford and Brighton, all the fans just laughed about it and sank several Guinness after.

Also being called the big man by a huge Rangers fan. He was about 7 foot tall and wide and I am 6'3 (and wide). 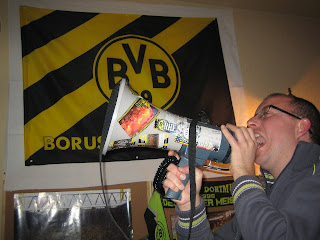 That's a tricky one. Probably the weekend where we went to two games in a day - one in Germany and the other in Holland (Rot-Weiss Oberhausen & VVV Venlo).

From the outside Munich, from the inside Real Madrid.
Favourite country for watching football?

I have a real bias for whatever end of the ground I am in.

Only when I cant go on a trip. Not getting into Belgium v Bulgaria was annoying, a bit like not getting into Anderlecht v Ghent - lighten up Belgium! Glasgow Rangers not having adequate drainage resulting in the game being off.

Italy - cant believe I have not seen a game there!

Too many to mention, meeting Rod Stewart (lookalike) and seeing the World Cup (lookalike) in Munich takes some beating though.

Best game you have seen?

Holland v Czech Republic, Euro 2004. Anyone that does not put this game that was at this game is telling porkies.

There you have it folks - I will add some more answers from some of the other chaps in time. Again, if you want any questions answering then feel free to drop us a line and we'll do our best to answer. Roll on the next European Football Weekend.