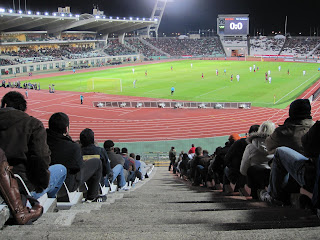 Florints Against the Machine
Debrecen 1-2 PSV Eindhoven (21:10:10)
The first rule of the EFW Oktoberfest is that you should talk about the EFW Oktoberfest. Although you might find this hard to believe - I normally take a couple of notes at games I attend. However, upon my return from four days in Hungary and Slovakia, my notes consisted of just four words and read thus: Florints Against the Machine. It's a headline I was very pleased with, but it's not quite the 5000 words required for five reports. Tsk.

The reason for the lack of notes is that on these trips, it's pretty much mirth and hilarity all the way; an abundance of football, oodles of beer and 29 first-rate lads who make the trip what it is. And then there is the locals to factor in - all of whom were friendly and welcoming. Well, aside from the briefest of run-ins with a few Zalaegerszegi Torna Egylet ultras who mistook us for followers of Budapesti Vasas Sport Club, but more of them later in the week.

First up was this Europa League tie, and we weren't the only ones who'd had to travel a fair distance to the Hungarian capital for it. Debrecen is well over 200km from Budapest, but because their current stadium doesn't have enough backstage requirements for the UEFA suits, they have to switch their increasingly frequent European ties to the national stadium. In fairness, the club bused in the Loki supporters free of charge. The majority of the several hundred PSV fans had sat on a coach for more than a day to be here as well. And it was chilly. Lovely floodlights though. They look like giraffes. 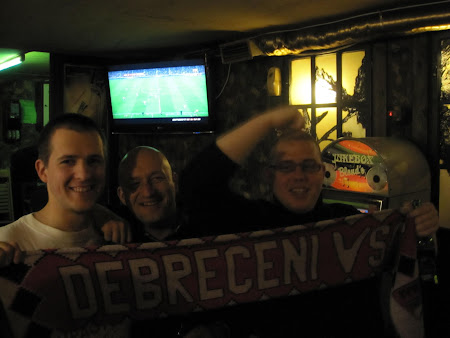 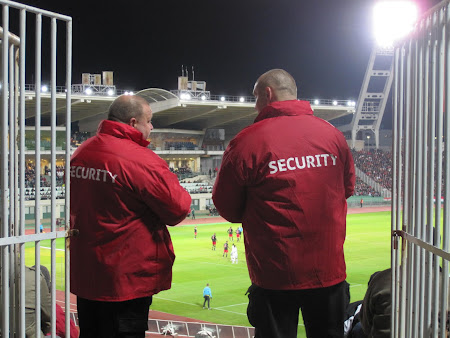 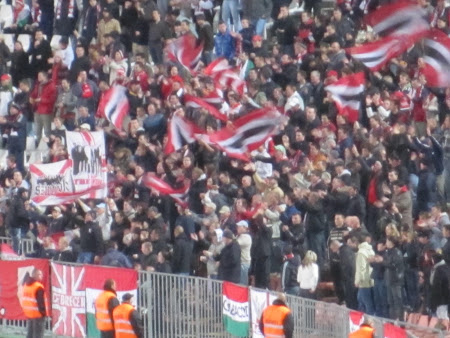 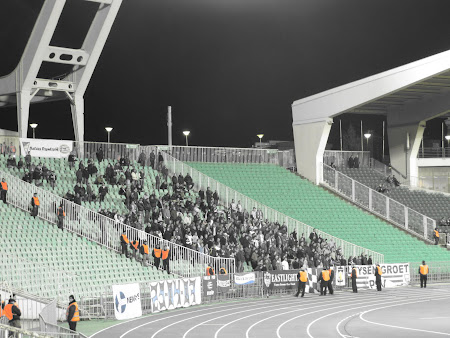 We'll probably go on to beat Feyenoord 10-0 on Saturday. 300 buoyant PSV fans.
The ground itself was built by the people for the people. As such it was called the 'People's Stadium' up until around 10 years ago when the Hungarian FA decided to name it after Ferenc Puskás - no introduction or explanation required. It was the flagship of Hungary's Communist, postwar reconstruction. It was also the place where Trevor Brooking scored my favourite ever goal in football - the one where brilliantly, the ball got stuck into the stanchion.
The reception at the EFW hotel - across the road from the stadium - had doubled up as the press accreditation centre for the evening. A couple of the lads had press passes, but chose to sit with the masses. Some late arrivals received free tickets, and the Belgians on the trip picked up some player passes from a PSV player they knew. The rest of us coughed up around £6 for actual match tickets.
In the run up to the match, I'd been in contact with Janos Varga - a Debrecen fan who had booked a pub near to the stadium for us. This is fairly normal procedure in Budapest for such a large group of people, and you can never be too sure how the locals will react. As it was there was no trouble at all and the huge police operation on the night seemed a trifle superfluous.
The novelty of travelling to Budapest for these games is clearly wearing thin with the Debrecen supporters. Just over 18,000 strained their eyes to see over the running track (boo - Ed.) onto the pitch in a ground that holds 56,000. They are the process of planning a new stadium, but in the meantime, surely there is a better place to hold these ties? The next day, the local paper run a story with a computer generated image of that new ground - interestingly enough, alongside a bigger photo of two naked lesbians. Welcome to Hungary.
The actual match was fairly entertaining, especially when the 'home' side took the lead. For a while the stadium was rocking, but then - as the Loki website reported via Google translate - PSV turned on the rockets, and eased to a 2-1 win. 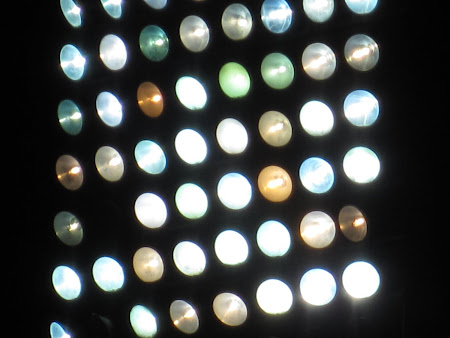 Our lux was in on the hulking great Eastern European floodlights front. 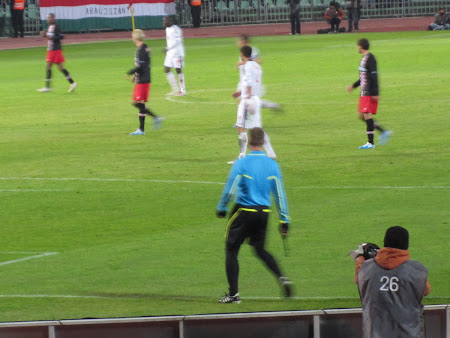 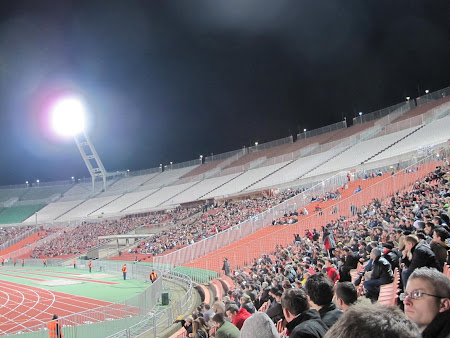 A giraffe-like floodlight keeps a check on the empty seats. 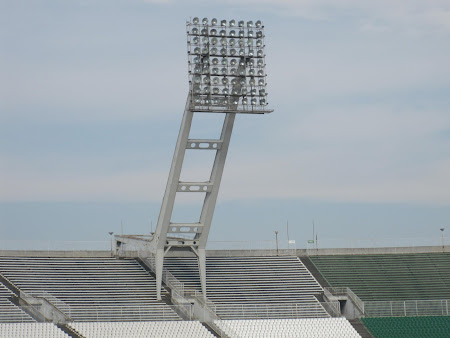 Well, our hotel was only across the road. It would have been rude not to sneak back in for another look.
If only the Europa League would revert back to a straight knock out competition. It seems utterly ridiculous to have to play 342 matches to get to the final. No club makes any money out of it, clubs rest players, fans are bored and so - to inject a modicum of interest back - a straight two-legged knock out seems to be the only way forward. These are well worn views of course, but just in case Michel Platini is reading this nonsense and that.
After the match we holed up in a nearby local pub for local people where pints of very agreeable Hungarian beer cost around £1. After a bit of encouragement from the landlord - who must have thought it was Christmas - we sung a few songs. There were fans of Debrecen, Ferencvaras, Vasas SC, Lewes, Royal Antwerp, 1860 Munich, Maccabi Haifa, Legia Warsaw, Tranmere, Barnet, Forest Green Rovers, Weymouth, Leeds United, Scarborough Athletic, Merstham, Brighton, West Ham, Rochdale, Liverpool, Ipswich, Tooting and Mitcham, PSV and Colywn Bay in there - all getting along famously and forming new friendships. That's is exactly what I love and why European Football Weekends are so special. Egészségedre.
For lots more photos of that night and the rest of the trip CLICK ME.
For an excellent video put together by The Ball is Round blog CLICK ME.
Follow European Football Weekends and The Ball is Round on Twitter.
- Feel free to comment or ask any questions below -
Posted by Danny Last at 10:14

Yet another great start into a brilliant EFW Oktoberfest. The whole lot participating, Jammings Pub before and the aptly nicknamed "O2 Arena" after the match.
And yes, the visit to the National Stadium, of course.

Hello EFW guys,
it was nice to meet you here in Budapest. As I see you enjoyed your stay here which makes me proud and happy.
Looking forward to meeting you again!

And, ja, Stoffers - I imagine you were partly (shurely "mailnly"? Ed) responsible for the delighted O2 Arena landlord running out of each beer in alphabetical order ;)

I thought I liked the site before, I come back to read this and you've linked Trevor Brooking vs Hungary! My Dad used to show it to me all the time and I haven't seen it in years, absolutely class!

Great report as always as well.