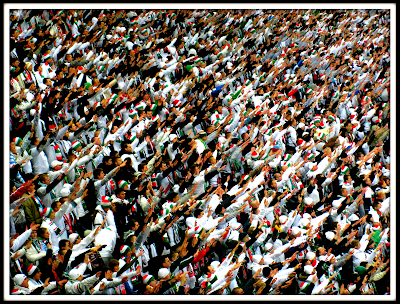 This will be the last post on European Football Weekends. But hey, don't be shedding any tears - it's been a thunderously good ride. At the start of 2012 I decided to take a little break from EFW, and see how things panned out. I've enjoyed that freedom so much that it now feels right to hang up the old keyboard. You don't realise how much time it eats up until you stop. It certainly won't be any great loss to the literary world, but I hope that somewhere along the way you've raised a titter or been inspired to venture out on a trip of your own by stumbling across this nonsense.

The last report I penned for these pages was read nearly 10,000 people - and as such I think EFW can hold its head up and say that we went out on a high.

The EFW Facebook group - which, pleasingly, has a life of its own - will still continue along with the forum and, naturally, I'll still be posting photos of dogs in football scarves on my own Twitter feed. I will of course continue to offer out any advice to those travelling abroad to watch their football.

The best thing about running this site has been the people I've gotten to meet through the last three years. There's far too many to thank and, frankly, the last thing anybody needs here is a rambling, tearful speech so let's move on shall we....

European Football Weekends: we came, we saw, we conquered. What's not to like?

Danny Last
Posted by Danny Last at 12:16 15 comments: Links to this post