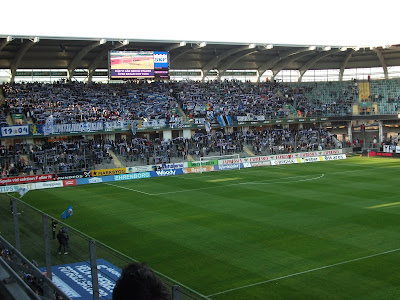 This season has witnessed some great trips to places as diverse as Zagreb, Lisbon and Eindhoven. Looking for something different I hit upon the idea of Sweden. Why wouldn’t I? The season had just kicked off, it wouldn’t be snowing and it’s always seemed like such a nice place. After all, I drive a Saab so I have a real affinity with the place already. A bit of t’internet research and a quick response to an e-mail sent to IFK Goteborg led me to pick out the clash of the Swedish titans, IFK and Helsingborgs IF, as the place to start. Can I buy tickets on the day I asked. ‘Sure you can, we would love to welcome you to our beautiful stadium’ came the reply. Being ever wary of pitching up hundreds of miles from home and not being able to get in, I took the easy way out and purchased two main stand tickets through the link on their very easy to follow (thanks to Google translate) website for 220 SKR, about £22 each. Rather handily I was able to download the match tickets and print them off at home. Nice.

A ridiculously early start from Lincolnshire saw my erstwhile travelling companion Hutch and I arrive at Stansted at 5.30am and after parking in the long stay car park (which judging by the length of the shuttle bus ride is probably in Hertfordshire) arrived just in time to attempt a take off at 6.45. I say attempt because in over 30 years flying around the world I have never experienced an aborted take-off before. It was a little unnerving to feel the brakes slammed on as we hurtled along the runway. ‘Welcome to Gothenburg’ announced a wag in the cockpit as we came to an abrupt halt. Alas some bright spark on the ground had left the cargo door unlocked. Well what should I expect for a flight costing £40 with free web check in?

Luckily no further incidents befell us and we were soon in downtown Gothenburg sampling the sights and the local hostelries. The city is quite compact and a number of bars are situated on the main drag Kungsportsavenyn. We settled for the quaintly named ‘Dubliner’ and settled in for a few jars. If the aborted take-off wasn’t enough to induce heart failure, the price of beer certainly did the trick. Two pints of Spitfire came to 124SKR, about £12.40. Yes that’s right, £6.20 a pint! 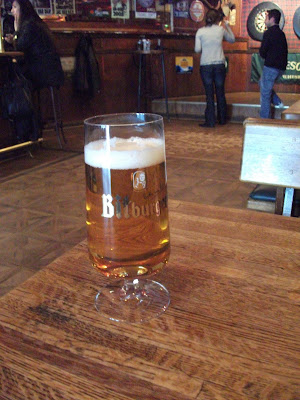 Probably the most expensive pint in Europe
Significantly lighter in the wallet and the head, we made our way to the main event. The stadium is called Gamla Ullevi and forms part of a bigger complex only 5 minutes walk from the central station. The stadium replaced Gothenburg’s old ground a couple of years back and is a purpose built arena with a 16,000 capacity. A quick jar in the supporters bar underneath the main stand led to some friendly banter with the locals who found it very strange that we had travelled from England to watch a match between two teams neither of us supported.

IFK had started the season badly and had lost both opening games. Helsingborgs however had won both of theirs picking up from their runners up placing last season. Already there was talk of this being a six pointer for IFK as defeat would further sap confidence of a young team and leave them in the relegation places. The ground was probably two thirds full with Helsingborgs bringing around 600 fans with them on the 3 hour train journey up the coast, which when combined with the IFK scarf waving ultras making a fair racket made for a feisty atmosphere. 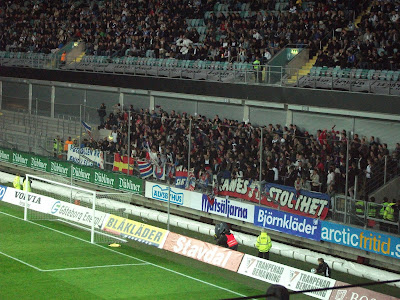 Helsingborgs fans precariously placed beneath the home fans
The game itself was very open with both sides looking dangerous coming forward but a little shaky at the back. Rasmus Jonsson stood out on the left for Helsingborgs as did Elmar Bjarnason on IFK’s left flank. It was no surprise then when a surging run from Bjarnason saw him square the ball for the delightfully named Andreas Drugge to poke the ball home. Cue mild hysteria. It was at this point that I noticed two flags over in the opposite corner. I’ve no idea who Ragnar is or what presidency he or she is standing for but I wish them all the best. And why Stadler and Waldorf are there too was equally baffling. Strange people these Swedes. 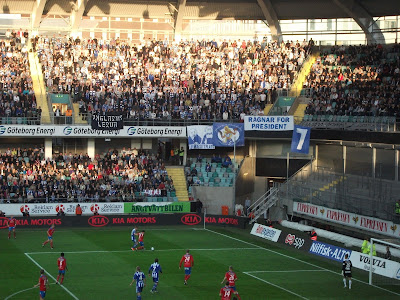 Any ideas as to the flags? Me neither
Half time came and went with IFK 1-0 up. The only reason the lead had not been doubled was thanks to a quite brilliant reflex save from the Helsingborgs keeper Hansson (Alan to his mates). IFK were on top for the first twenty minutes of the second half with Alan in great form again making two more outstanding saves. You just knew that as they hadn’t scored, the inevitable would happen. Alas, it did and an inswinging corner was nodded home by the rather tall and unfeasibly blond centre half Peter Larsson. Simple. Helsingborgs came into the game and looked far more likely to sneak a winner and it came as no surprise when, as the 90th minute loomed, their centre forward Alexander Gerndt (the only lad on the park whose name didn’t end in ‘son’) rifled home an unstoppable left foot rocket from just outside the box. The Helsingborgs fans behind the goal went as wild as Swedes seem to get and waved their scarves around feverishly in celebration.

We drifted back into the city centre and found somewhere to spend some more of the second mortgage before our bank balances were saved by the pub closing at 10pm! What? Yes folks, be warned, Gothenburg winds down at 10pm on a Monday night. Even the seven eleven closed at 10. The following morning saw some more ale quaffed before a wander around the city admiring the incredible looking people this city boasts as residents. Two coffees were taken on the harbour side and this only set us back £2.70 per cup. Bargain! Alas our time in Sweden came to an expensive end and we flew back to Stansted, already planning our next trip. Norway appeared top of our list with one of those teams I always loved the name of being the favourite. Viking Stavanger here we come.......

124 crowns for two beers is still cheaper than some of the pints I sunk over the same weekend. The second cheapest pint I found over the course of four large towns/cities was in Göteborg - you missed out on Gamle Port. I'm sure that pub was open later on the Monday evening.

This wasn't a 6 pointer for IFK - the match on the following Thursday was a much bigger game for them (against AIK). They lost that.

"Ragnar for president" = Ragnar Sigurdsson is one of the centrebacks for IFK and he has a lot of support.

"Waldorf and Stadler" = the part of the ground where the flags are hanging houses the older part of the core IFK-supporters and they usually use the proximity to the away section to give some friendly advice from the balcony to the visitors.

Many thanks SFYF, it had us wondering! Particularly the Waldorf and Stadler but when you explain it, it's obvious! Top day out in a great city.

You think it's expensive in Sweden but you still planning on going to norway?! Good luck dude... ;)

Have a look at this clip. It's IFK Gothenburgs entry song. They have an amazing atmosphere.

Enjoyed reading your report but it´s actually Helsingborg - or the entire name Helsingborgs IF (known in Sweden as HIF) - and never Helsingborgs. I won´t bore you with Swedish grammar to explain why. Keep up the good work!